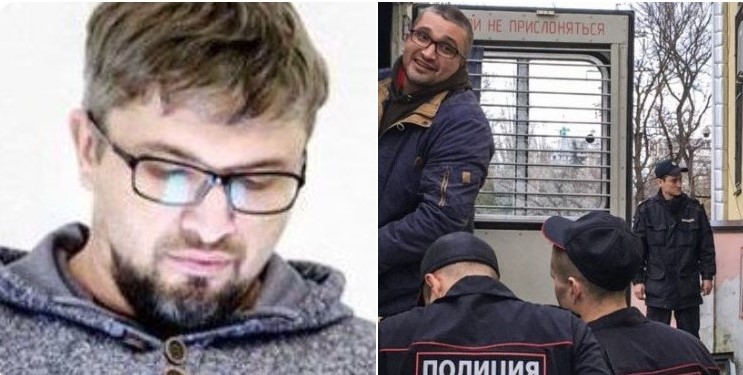 It is dangerous in Russian-occupied Crimea to write the truth, especially about political persecution and other rights violations.  Nariman Memedeminov has already spent a year in detention for his civic journalism and active role in the Crimean Solidarity civic initiative, and is now being deprived of an urgently-needed medical operation.

The 35-year-old father of three has been suffering severe pain for two months, yet it took multiple appeals from both Memedeminov, and his lawyers Emil Kurbedinov and Edem Semedlyaev before he was finally, on 12 February, examined in hospital and an operation scheduled for 14 March.  Perhaps deliberately, two court hearings (over appeals, which are always rejected by Russian-controlled ‘courts’) were scheduled for that same day.  Kurbedinov explains that Memedeminov had specially given written authorization for the second hearing to take place in his absence, yet they quite unnecessarily rescheduled the operation for the end of March. Ukraine’s National Union of Journalists has condemned the move, pointing out that refusal to give Memedeminov proper medical treatment is tantamount to torture.

Even if Russia was not already breaching international law by imposing its legislation on occupied Crimea, Memedeminov’s arrest and imprisonment would still be of staggering cynicism.

He was arrested on 22 March 2018 after a search by armed and masked enforcement officers of his home in Kholmovka (Bakhchysarai district).  Using foul language and totally gratuitous force, the men broke down the front door and forced Memedeminov to the floor in front of his terrified children.  Like all other such searches under Russian occupation, this found nothing, yet Memedeminov was taken away and has been in custody ever since.

He is charged under Article 205.2 § 2 of Russia’s criminal code – ‘public calls to carry out terrorist activities, public justification of terrorism or propaganda of terrorism via the Internet’.

This extraordinary charge is based solely on three harmless YouTube videos, two of which were posted  in 2013, well before Russia’s annexation of Crimea.

No terrorism, and in fact Memedeminov was simply reporting what was happening.  This, it should be stressed, was a perfectly peaceful meeting of a movement which is legal in Ukraine, on Ukrainian territory.

The second video that the FSB is using for this prosecution is from 10 October 2013,   It is called ‘Protest gathering instead of a conference’ and reports that people planning to take part in a  Hizb ut-Tahrir were not allowed into the Ukrainian Theatre in Simferopol,   There are no calls to anything in the video, let alone to violence or ‘terrorism’.

As mentioned, only one video post-dates Russia’s illegal annexation of Crimea.

Hizb ut-Tahrir is a peaceful pan-Islamist movement which is not known to have committed an act of terrorism or violence anywhere in the world.  Russia’s Supreme Court declared it, and 14 other organizations, ‘terrorist’ in 2003, during an effectively secret hearing which members of the organization and human rights groups learned of only after it was too late to lodge an appeal.  Vitaly Ponomaryov from the Memorial Human Rights Centre has looked into this ruling and believes it was passed to enable Russia to easily hand Uzbek citizens over to Uzbekistan where they were facing religious persecution.

There is effective confirmation of this hypothesis in the fact that for some time after the Supreme Court ruling, there were no prosecutions at all.  Even after the FSB began charging people with supposed involvement in Hizb ut-Tahrir, until around 2014, the sentences were very mild, and did not necessarily involve imprisonment.

Nothing at all changed to justify the move towards the draconian sentences (up to life imprisonment) now passed or facing Muslims, both in occupied Crimea and in Russia.

It seems that the Article under which Memedeminov is charged has also begun being used quite recently, with this, again, not for any objective reason.

All Russia’s prosecutions on Hizb ut-Tahrir charges are particularly shocking in that nothing more is required for a long sentence for supposed ‘terrorism’ than to claim some tenuous link with Hizb ut-Tahrir.  Real proof is not even required, as the FSB uses certain ‘experts’ who provide the assessment required, as well as ‘secret witnesses’.

The situation in occupied Crimea is even more disturbing since Russia is very clearly using Hizb ut-Tahrir prosecutions as a weapon against Crimean Solidarity, the civic initiative helping political prisoners and their families, as well as reporting on human rights violations.  Memedeminov is one of at least seven Crimean Solidarity who are now imprisoned and facing long sentences for their civic activism and, in Memedeminov’s case, his civic journalism.

The authoritative Memorial Human Rights Centre declared Memedeminov a political prisoner in May 2018.