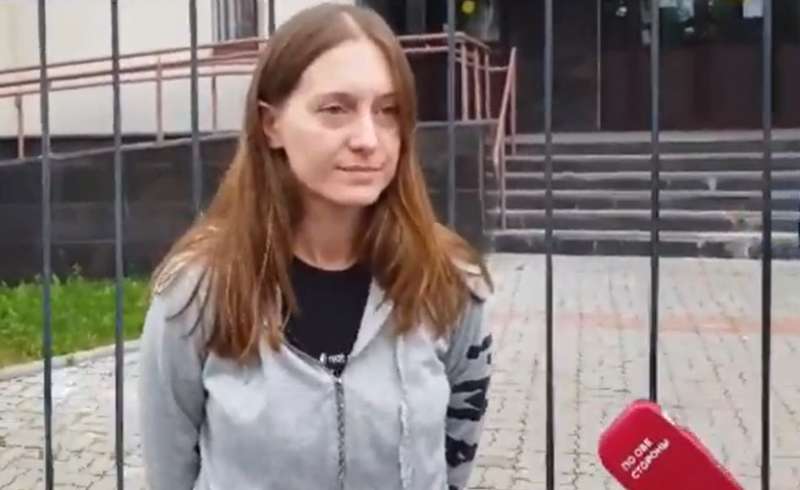 Scroll down to the bottom for information about the sentence

This is from Svetlana Pokopyeva’s final address to the court which on 6 July may sentence the independent Russian journalist to six years’ imprisonment for expressing her views in an opinion piece.  This was the sentence demanded by state prosecutor Natalya Meleshenya on 3 July, together with a four year ban on journalist activities. Prokopyeva’s stated view that this is punishment for hard-hitting journalism is shared by all Russian and international human rights and media organizations who have condemned the trial.

Prokopyeva is charged with ‘“public incitement to terrorist activity, public justification or propaganda of terrorism.” (under Article 205.2 of Russia’s criminal code) over comments she made after 17-year-old Mikhail Zhlobytsky blew himself up at the entrance to the Akhangelsk FSB offices on 31 October 2018.  He had left a statement on a anarchist Telegram page saying that this was an act of protest because the FSB “fabricate criminal prosecutions and torture people”.

The young lad died, and three FSB officers were injured, so nobody is justifying such actions.  Nonetheless, the FSB’s speed in labelling it a ‘terrorist attack’ and its aggressive prosecution of people for commenting on it were clearly aimed at preventing others from noting that it had been an act of protest and from considering the accusations Zhlobitsky made.  As well as multiple cases involving Ukrainian political prisoners, there are a number of notorious Russia cases which have undoubtedly been fabricated by the FSB, with torture one of the main methods standardly used.

40-year-old Prokopyeva is a freelance journalist from Pskov, who often wrote for Radio Svoboda.  In this case, on 7 November 2018, Prokopyeva hosted a program on the Pskov affiliate of Ekho Moskvy, with a text version later posted on the site.  In her comments, she was highly critical of the brutal system under Russian President Vladimir Putin (full quote below).  instead of considering Prokopyeva’s words, which were an attempt to understand a tragedy, not to condone the lad’s methods, Russia’s enforcement bodies decided to accuse her of ‘justifying terrorism’.

Prokopyeva explains that. almost a month after the broadcast, Russia’s “quasi-censor” Roskomnadzor claimed that there were “elements of justification of terrorism” in her text. It imposed massive fines on the media that had broadcast / published her words, while at the same time the Investigative Committee began considering criminal charges against Prokopyeva herself under Article 205.2.

On 6 February 2019, the journalist was subjected to one of the FSB’s standard ‘operations’ in which around ten armed men in helmets burst into the flat and carried out a search.   This was the first time, Prokopyeva says, that they robbed her, taking away laptops, telephones, a Dictaphone and memory drives.  The second time was six months later when, without any conviction, she was placed on Russia’s notorious ‘list of terrorists and extremists’, with this imposing serious financial restrictions.

Prokopyeva has emphatically rejected these charges which she calls “the banal revenge of offended FSB officers.  In that text, I put the blame for the Arkhangelsk bomb blast on them.  I wrote that the repressive state had received a reaction, that the brutal law enforcement policy was brutalizing citizens.  That blocked legitimate paths are pushing the protest momentum into such a socially-dangerous direction.”

She invites people “if they’re not afraid” to publish the words that could get her a 6-year sentence.

“A strong state. A strong president, a strong government. A country where the power lies with the FSB.

The generation that the Arkhangelsk bomber belonged to has grown up in this atmosphere. They know that you can’t go to a protest, that they’ll be dispersed, or even beaten and then sentenced. They know that you can get punished for single-person pickets.  They see that you can only safely be in a particular collection of parties and only express a particular range of views without fear. This generation has learned through example that you can’t get justice in the courts, that the court will rubberstamp the ruling that comrade major arrived with.

The many years of restrictions of political and civil liberties have created in Russia not merely an unfree, but a repressive state. A state with which it’s dangerous and frightening to have anything to do with.”

Prokopyeva says that she still thinks this and that, indeed, her prosecution is merely further confirmation.  This was no justification of terrorism, but an analysis of the reasons for it.  Perhaps she was wrong in her views, but nobody has tried to prove this.  What she has received is a fist in the face for comments that they didn’t like.

“This is a fist in the face for each journalist in our country”.

Acquittals in Russia are virtually unheard of, especially in such politically motivated cases.  On 6 July, the Second Western District Military Court found Prokopyeva ‘guilty’ of the charges, however imposed only a (massive) 500 thousand rouble fine. The court (with presiding judge Andrei Morozov) ordered the confiscation of her laptop, however did not prohibit her from engaging in journalist work.  Since the prosecutor had demanded a 6-year prison sentence and 4-year ban on journalist activities, the sentence is better than feared.  There is a chance, unfortunately, that this is aimed at deflecting the considerable public attention and that the prosecutor will challenge the non-custodial sentence. Prokopyeva has herself said that she will be lodging an appeal, and rightly so.  This conviction is a terrifying precedent and a clear threat to every journalist in Russia and, unfortunately, in occupied Crimea.