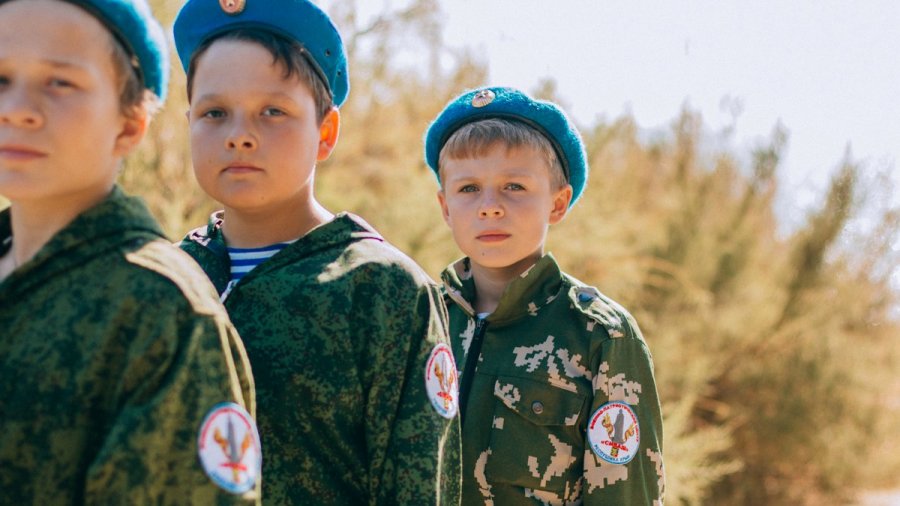 An ‘Avangard military-patriotic educational centre’ is to be built in Russian-occupied Crimea with children learning all kinds of military skills, as well as highly distorted views of history, war and what ‘patriotism’ entails.  Russia’s Defence Minister, Sergei Shoigu reported in March this year that they were planning to build 37 ‘Avantgard’ centres.  These will be similar to, though probably not as expensive as the first such centre in the Moscow region, which reportedly cost a hefty 63 million USD.  This is in a country where a recent ‘competition’ for worst school toilet found many ‘competitors’ being little more than holes in the ground, and where almost a quarter of the population do not have internal plumbing.  Both the indoctrination Russian children are subjected to, and themilitarization, with children trained in using weapons and encouraged to want to serve in the military, are profoundly disturbing in the Russian Federation.  In occupied Crimea, they are a grave crime. The Fourth Geneva Convention specifically prohibits an occupying power from compelling people on occupied territory to serve in its armed or auxiliary forces and states that “No pressure or propaganda which aims at securing voluntary enlistment is permitted.”

The Crimean ‘Avantgard’ will be built on around 10 hectares of municipal land near Orekhovo in the Saki region.  According to the Russian-controlled Kryminform site, the centre will be created by the command of the Russian Black Sea Fleet.

These ‘educational centres’ are only one part of a huge complex of measures militarizing childhood in occupied Crimea.  There are constantly events linked with the so-called ‘Yunarmia’ or Youth Army, which is overtly aimed at encouraging children to want to serve in the Russian army and ‘defend’ Russia, with Ukraine, America and NATO tacitly or implicitly treated as ‘the enemy’.

In January this year, the so-called ‘KrymPatriotCentre’ organized military tactical training and reconnaissance units in mountainous or forested areas for members of Yunarmia from Simferopol.  The children were taught about using weapons; moving around, including during battle; about fighters’ behaviour during contact with the enemy, etc.

Although there are reports that membership of Yunarmia is by no means as ‘voluntary’ as claimed, it is quite likely that children will view such activities as ‘fun’.  They will certainly not understand that the real aim is that they lose their identification with Ukraine and become indoctrinated into wanting to ‘defend Russia’ and into viewing Ukraine as a foreign and hostile state.

In January 2021, several prominent Ukrainian human rights groups pointed to ways in which the occupation regime is trying to get children to hate Ukraine.  Donbas militants have been brought in to speak with children and give them a gravely distorted view of Kyiv and of the Ukrainian army.  The example was given of a 13-year-old girl who had said that she wanted to join Yunarmia so as to be able to defend “her country” if Ukraine invades.   The NGOs identified 12 individuals actively complicit in Russia’s militarization.

Vast amounts of money are being spent on such indoctrination and propaganda of the Russian military.  Weapons and training in how to use them are clearly aimed at attracting Crimean children to the occupiers’ army and at being duped into believing Russia’s dishonest historical narrative and the foisted view on ‘patriotism’.

Yunarmia has, on many occasions, been likened to the Naz Hitlerjugend.  How accurate that comparison is can perhaps be debated, but there are certainly no grounds for comparing it with, say, boy scouts and girl guides.  Yunarmia and such ‘military-patriotic’ educational centres are about indoctrination and militarization, with the aim clearly to eradicate children’s Ukrainian identity and to ensure ‘loyalty’ and ‘correct views’. Another critical difference between such organizations about youth movements in the West is that none of this is happening in a vacuum.  Freedom of speech has been systematically crushed in occupied Crimea and both Russian state-controlled media and textbooks in school inculcate the same lies and distortions.