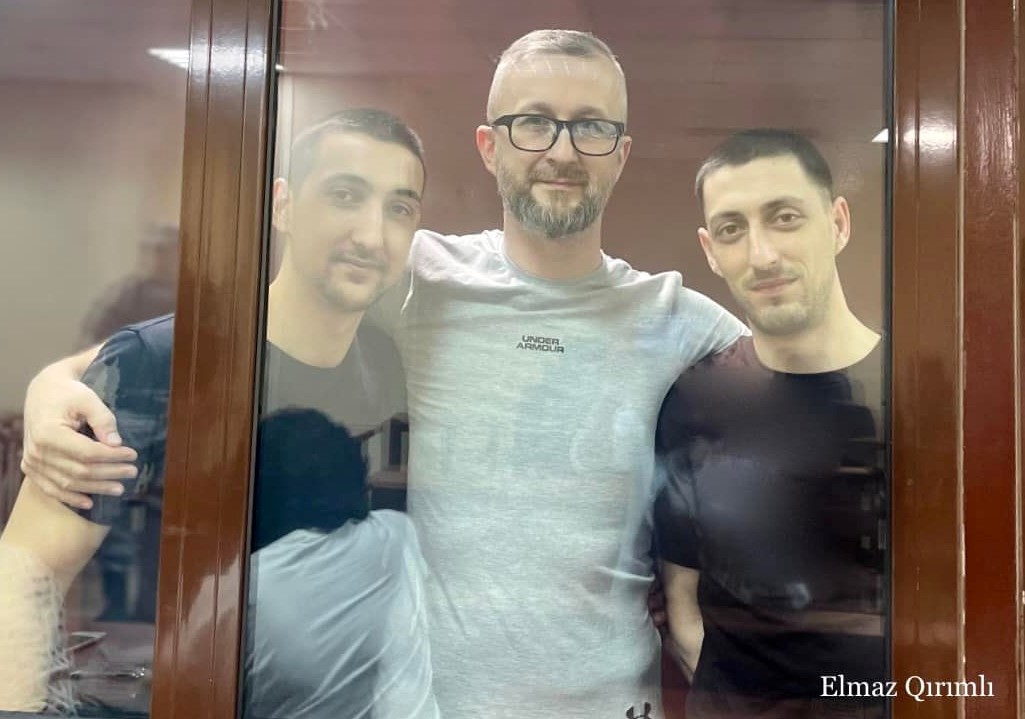 It is well over five years since Russia was expressly ordered by the UN’s International Court of Justice to revoke its extraordinary ban on the Mejlis, or self-governing body, of the Crimean Tatar people.  Instead of complying, it has fabricated at least three political trials aimed at discrediting the Mejlis, including that now coming to an end against Nariman Dzhelyal, First Deputy Head of the Mejlis, and two cousins – Asan and Aziz Akhtemov.

The three men all gave powerful final addresses to the occupation ‘Crimean High Court’ on 29 August, with sentences to be announced on 21 September. There are no grounds for expecting a just verdict from the Russian-controlled ‘court’, and the three-week delay in passing sentence may simply be to deflect attention from this internationally condemned ‘trial’.  Since the arrest of Nariman Dzhelyal came almost immediately after he took part in the inaugural meeting of the important Crimea Platform in Kyiv on 23 August 2021, it is possible that Moscow preferred not to sentence him immediately after the second Crimea Platform exactly a year later.

During his address, Nariman Dzhelyal mentioned again that one of the FSB officers had openly linked his arrest with his participation, together with high-ranking representatives of 45 democratic nations, in the Crimea Platform.  The timing was doubtless deliberate, however Dzhelyal had long expected persecution from the Russian occupation regime.  He pointed out during his address that had he not been arrested back in September 2021, they would have come for him in February 2022, since he has not concealed his opposition to Russia’s full-scale invasion of Ukraine.

He spelled out what he sees as the main objective behind this shoddy fabrication of ‘sabotage charges’ against him, civic journalist Asan Akhtemov and his cousin, Aziz Akhtemov.

“The criminal charges against me, an activist of the Crimean Tatar national movement, a delegate of the Qurultay [National Congress] and First Deputy Head of the Mejlis of the Crimean Tatar people, are aimed at outlawing and labelling as ‘terrorist’ the entire system of representative bodies of the Crimean Tatars.  And, in this way, opening the way to mass repression against the indigenous people of Crimea.  This is not simply an obvious and logical conclusion.  I was told about such an intention, whether deliberately or inadvertently, within the FSB building. “

Dzhelyal also pointed to a statement by Sergei Aksyonov, the pro-Russian politician with a criminal background whom the invading Russian soldiers without insignia installed at gunpoint as ‘Crimean leader’ in February 2014,  Aksyonov has made many shocking references to the Mejlis, but Dzhelyal specifically noted a post on Aksyonov’s Telegram channel after his arrest in which Aksyonov claimed that “the Mejlis is a hostile and terrorist organization whose aim is to do harm in Crimea.”

In their addresses, both Aziz and Asan Akhtemov pointed to the torture that the FSB had subjected them to.  As Aziz rightly noted, there would have been no reason to [hold the men incommunicado and] torture them, had the FSB been able to produce any evidence to back the charges against them.

“Have you ever been tortured?  Threatened with the killing of your loved ones?  Even people who have been trained are unable to endure that and under the effect of torture begin to say and ‘admit’ to things that they did not do.  For the last eight years, we have watched the bestial work methods of the FSB.  They present only what suits them as truth in order, yet again, to stigmatize the Crimean Tatar people.”

Asan Akhtemov said that he was convinced that this was a politically commissioned ‘trial’, noting, as proof of this, the clear bias towards conviction of both prosecutor and court.  As reported earlier, the court has not only allowed the ‘testimony’ of three totally anonymous ‘witnesses’, despite the lack of any grounds for such secrecy.  It has also actively obstructed questions from the defence aimed at demonstrating that such ‘anonymous witnesses’, who may have never set eyes on the defendants, are not telling the truth.

There is a great deal more that the panel of ‘judges’:  Viktor Ivanovich Zinkov (presiding); Aleksei Viktorovich Kozyrev and Sergei Nikolaevich Pogregniak have ignored.  There is no material evidence in this case at all, and no particular evidence that the alleged act of sabotage on 23 August 2021 (while Dzhelyal was at the Crimea Platform in Kyiv) was anything more than some minor damage to a gas pipe caused, at most, by vandals.  As well as the compelling testimony about the torture they had endured from both Akhtemovs, there was also confimration from two Crimean Tatars ‘witnesses for the prosecution’ that their ‘testimony’ had been extracted through torture and / or threats.

After being held incommunicado for three days, the other two men, Odamanov and Useinov, were jailed for 10 and 15 days on absurd charges, quite unrelated to the armed raids on their homes. This was clearly after they had been tortured into providing ‘testimony’ against the others.  Here too, however, the FSB miscalculated, as the men refused to be silent and told the ‘court’ how their false testimony had been obtained. It was telling that the prosecution had repeatedly tried to get Odamanov’s ‘testimony’ read out in ‘court’ without him having to be present.

In December 2021, two Crimean Tatars found the courage to go public about the torture they had been subjected to while held incommunicado by FSB officers. officers.  Nariman Ametov spoke out four days after he was taken from his home, in handcuffs and with a bag over his head.  He was savagely tortured, including with electric currents passed through his body. Two weeks later, Kurtumer Chalgozov also went public.

‘Sabotage charges’ and 20-year sentence in revenge for Crimea Platform

He was seized by the FSB less than two weeks after the Crimea Platform’s inauguration.

Nariman Dzhelyal; Asan and Aziz Akhtemov have been imprisoned since 4 September 2021.  The charges against all of them have become increasingly more severe, carrying sentences of up to 20 years.  The men are charged with carrying out an act of sabotage as part of an organized group (Article 281 § 2a); purchase, transfer or possession of explosives as part of an organized group (Article 222.1 § 4; smuggling an explosive device, as part of an organized group (Article 226.1 § 1.  In the final indictment, Polozov reported earlier, they added ‘causing considerable material damage to the Crimean gas network (to the tune of around 1,425 USD).  They are claiming that (the alleged, and questionable) cut in gas to the military unit that supposedly ensued constituted “an attack on the Russian Federation’s defence capabilities”.