Russia uses Kherson ‘evacuation’ for enforced disappearance of more Ukrainian hostages and POWs Russian atrocities at Bucha may be nothing to those that will be found when Kherson is liberated Abductions and feared mass grave of Russian invaders" victims in liberated Vysokopillia (Kherson oblast) Russian invaders abduct Kherson oblast local leader, install “worst of the worst” collaboratorsMayor of Kherson abducted after refusing to collaborate with Russian invaders Russian invaders torture abducted Kherson patriot into ‘confessing’ to surreal ‘abduction plot’ Tortured to death by Russia"s FSB for helping to defend Ukraine from the invadersTeachers in occupied Kherson refuse to collaborate with Russian occupiers Russia uses terror and abduction in attempt to force schools to collaborate in occupied Melitopol Mayor of Melitopol Ivan Fedorov abducted after refusing to collaborate with the Russian invaders Russian priest arrested and prosecuted for sermon opposing Russia’s war against Ukraine Russia effectively admits it deliberately bombed the maternity hospital in Mariupol that killed three patients, including a childRussia brings grotesque propaganda to Berdiansk after Ukrainian journalists refuse to collaborate Russian invaders murder Ukrainian volunteers Impassioned appeal from Ukrainian Muslim leader in face of Russia’s war to destroy Ukraine Russia is forcing Ukrainians from occupied Crimea and Donbas to fight in its invasion of Ukraine Children among the dead after Russian invaders opened fire on fleeing civilians Russia installs its propaganda TV after seizing Kherson and imposes 15-year sentences for reporting its invasion of UkraineUkrainian survivors of the Holocaust demand Putin and Russia get out of Ukraine Russia continues its carnage, flouting binding order from ECHR to stop bombing civilians in Ukraine
• Topics / War crimes

Kherson journalist, imprisoned by the Russians, tells of killing, rape and torture of hostages 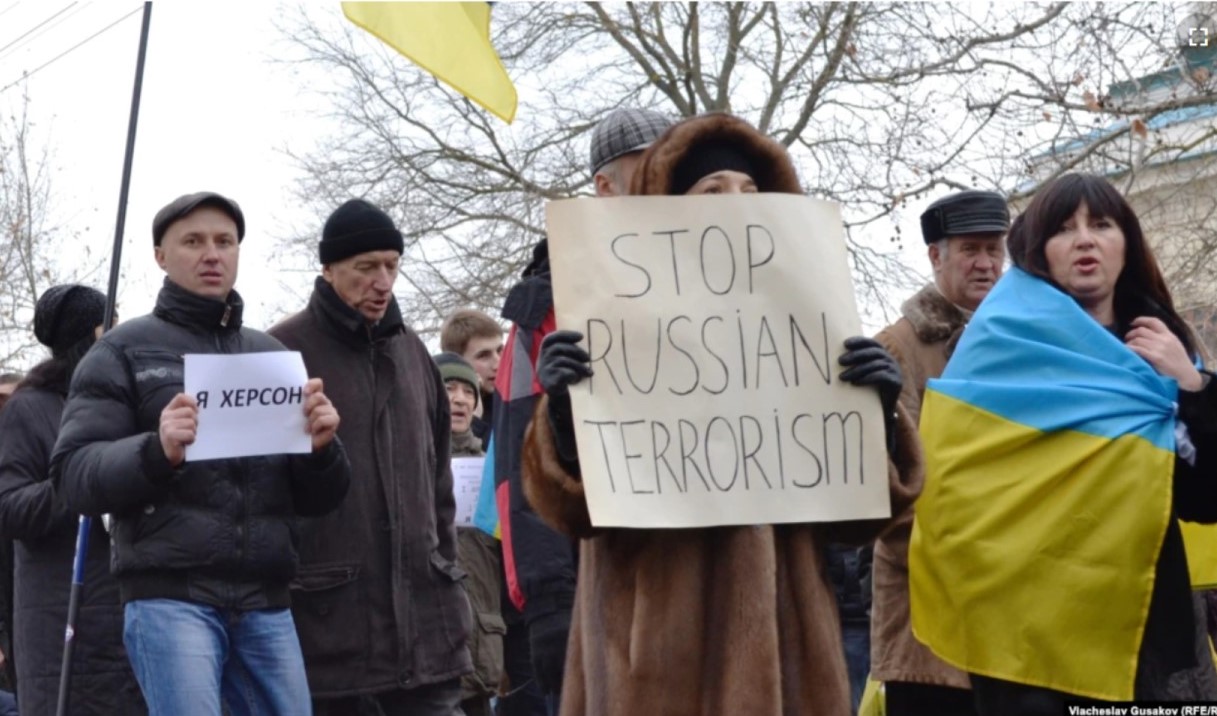 Kherson protest against Russian invasion. Such protests are one of the reasons why the Russian invaders actively abduct civic activists, journalists and local leaders

Anzhela Slobodian, a journalist from TV ‘Ukraina’ has described the month she spent in Russian captivity in occupied Kherson.  The details, reported by the Institute for Mass Information [IMI], cannot be independently verified, however this is because the Russian invaders created an information blockade in occupied parts of the Kherson oblast.  They are now reportedly seeking to destroy information and other critical infrastructure before Ukraine’s advance forces them to flee.

Slobodian posted the information on her locked Facebook page but gave IMI permission to publish it.  She explains that she was held prisoner for around a month in a police temporary holding unit which the Russians had turned into a torture chamber.  Unlike the male hostages, she and four other women were not physically tortured, but their captors tried “mercilessly” to degrade and crush them. One of the women, 66-year-old Fayina suffered a stroke and died in captivity.  She had been seized, Slobodian says, because her son was a volunteer. As their cell had sleeping facilities for only three people, Slobodian shared one with a woman called Svitlana who had been taken prisoner because her husband was at the front.  She was released with typical brutality.  The Russians took her away for interrogation and told her, “Your husband’s been killed, you’re free.”  Olha, a teacher, was seized because of her brother, held prisoner for 33 days and then released, without ever being interrogated.

Slobodian was released after 30 days.  She recalls that she had dreamed of that day and thought that all she would want to do was to forget the whole experience.  Instead, the very next day she and a friend brought a parcel (with food, items of hygiene, etc) for Natalia who was held for almost four months on fabricated charges. She too was finally released.  Although they are now in different cities, Slobodian says that all her (surviving) fellow prisoners will definitely meet again, in Kherson, liberated from the foul scum.

Not all survive Russian captivity, with the invading forces showing considerably more brutality when it comes to the men taken prisoner.  Slobodian writes that they heard how a prisoner had been killed and his body wrapped in plastic foil.  This, she said, was the ‘kadyrovtsi’  [the notorious fighters linked with Chechen leader Ramzan Kadyorv] “trying too hard” during interrogation. They also heard how men were raped behind the door of their cell.  They knew, she adds, where our lads were tortured with the use of electric currents, and where they were forced to speak.

Slobodian also confirmed earlier reports that the Russians were using the supposed ‘evacuation’ of civilians to move hostages, without any information as to where.  She had learned that 36 hostages had been ‘evacuated’ from the temporary holding centre, as well, seemingly, as Ihor Kolykaev, Mayor of Kherson.  Kolykhaev was abducted on 28 June, after he refused to collaborate with the invaders. According to Slobodian’s information, he is now imprisoned at Kalanchak.  He is thinner and has health issues.

Russia has been abducting Ukrainians since the beginning of its full-scale invasion.  Many of those seized in the Kherson oblast have been taken illegally to occupied Crimea where they have either already been subjected to kangaroo court ‘trials’ or are facing such.  These include former naval captain Oleksiy Kiselyov, writer, journalist and civic activist Serhiy Tsyhipa, and an ever-mounting number of Crimean Tatars.  At least two Ukrainian volunteers, Denys Myronov and Vitaliy Lapchuk, were savagely tortured to death in Russian custody, while the whereabouts of many others remain unknown.

Since Russia began its full-scale invasion, IMI has recorded 19 cases where journalists have been abducted.  Most have been released, though some, like Oleh Baturin, were first tortured.  Kherson journalist Kostiantyn Ryzhenko went underground in April after it became clear that the Russians were after him.  He managed to leave Kherson in late August when his relative fame began making his continued activities in the Kherson resistance a danger to others and himself.  In one interview after his escape, he predicted that Bucha and all the atrocities that were discovered after the Russians’ retreated, would not seem as horrific once Kherson was liberated and the Russians’ crimes came to light.  That day is now, hopefully, much nearer, which may even be one of the reasons why the invaders are seeking to destroy telecommunications towers, as well as anything else that they can’t plunder.