Abductions and feared mass grave of Russian invaders" victims in liberated Vysokopillia (Kherson oblast) Russian invaders abduct Kherson oblast local leader, install “worst of the worst” collaboratorsMayor of Kherson abducted after refusing to collaborate with Russian invaders Russian invaders torture abducted Kherson patriot into ‘confessing’ to surreal ‘abduction plot’ Tortured to death by Russia"s FSB for helping to defend Ukraine from the invadersTeachers in occupied Kherson refuse to collaborate with Russian occupiers Russia uses terror and abduction in attempt to force schools to collaborate in occupied Melitopol Mayor of Melitopol Ivan Fedorov abducted after refusing to collaborate with the Russian invaders Russian priest arrested and prosecuted for sermon opposing Russia’s war against Ukraine Russia effectively admits it deliberately bombed the maternity hospital in Mariupol that killed three patients, including a childRussia brings grotesque propaganda to Berdiansk after Ukrainian journalists refuse to collaborate Russian invaders murder Ukrainian volunteers Impassioned appeal from Ukrainian Muslim leader in face of Russia’s war to destroy Ukraine Russia is forcing Ukrainians from occupied Crimea and Donbas to fight in its invasion of Ukraine Children among the dead after Russian invaders opened fire on fleeing civilians Russia installs its propaganda TV after seizing Kherson and imposes 15-year sentences for reporting its invasion of UkraineUkrainian survivors of the Holocaust demand Putin and Russia get out of Ukraine Russia continues its carnage, flouting binding order from ECHR to stop bombing civilians in UkraineBabyn Yar bombed by Russia, 80 years after Nazi Massacre of Ukrainian Jews Russia proposes 15-year sentences and threatens "treason charges" for telling the truth about its war crimes in Ukraine
• Topics / War crimes 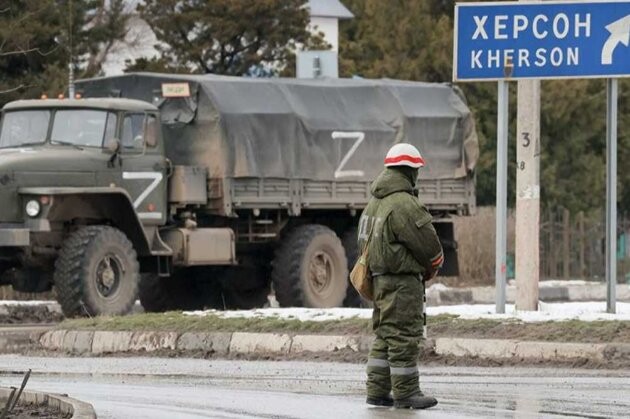 Kherson under Russian occupation Photo posted by Slovo i Dilo

It is clearly not only the Ukrainian Armed Forces that Moscow fears in Kherson oblast.  While claiming near 100% support for ‘joining Russia’ in its fake referendum, the Russian invaders are intensifying so-called ‘filtration measures’, with almost any residents in danger of being seized and / or disappearing.  Russia is also making it near impossible to leave the oblast, with one reason likely to be plans to forcibly round up Ukrainian men to fight Russia’s war of aggression against Ukraine.

According to Yury Sobolevsky, First Deputy Head of the Kherson Regional Council, over the past two weeks, the Russians have stepped up their so-called ‘filtration measures’ against patriots in Kherson oblast.  They detain volunteers trying to help people as well as any locals suspected of posting leaflets or writing patriotic graffiti, and farmers who refuse to ‘reregister’ their business under Russian jurisdiction. Sobolevsky stresses that residents should be extremely careful, however it is clear, from his comments to Crimean Realities that caution may not be enough.

The Russians, he explained, are constantly finding ways of intensifying ‘filtration measures’.  They want to catch those involved in the resistance movement and those helping the Ukrainian Armed Forces, for example, by providing information about the movement of Russian military technology.  For all the lies about near 100% support for Russia, the invaders are well aware that the Ukrainian Armed Forces are receiving information from people who remain on occupied territory.

As usual, the methods are extremely arbitrary with local residents more and more often detained, not because they have any links with the resistance, but merely because they were in the wrong place at the wrong time.  The most terrible thing, Sobolevsky says, is when the Russians then deny any knowledge of the person and claim that they never detained him.

Kherson journalist Rustam Avdeyev confirms that there is no rhyme or reason to these detentions.  If at first, they seized activists, as well as employees of, for example, the SBU [Ukrainian Security Service] or police., now there is no logic to it.  Avdeyev notes that at present the Russians seize teachers.  It does not look as though they are targeting specific individuals, with it sufficient for a person to have a pro-Ukrainian position.

Two days after Russian leader Vladimir Putin announced that Russia was annexing the Kherson and three other Ukrainian oblasts, none of which are fully under Russian control, Sobolevsky reported that Russia had made it as hard as possibly to leave the oblast. It was feared from the outset that Russia’s haste in concocting clearly fake referendums was aimed at enabling it to forcibly mobilize Ukrainians to fight its war.  On 1 October, only eleven residents had been able to leave Kherson oblast, with the invaders having now imposed a rule that special permission for this was required.

It has, in fact, been getting difficult to leave for some time.  In September, the Media Initiative for Human Rights [MIHR] reported that until the Ukrainian Armed Forces began its counter-offensive, many had sought to leave by going to occupied Crimea, then to Russia, and from there to a third country.  The relative ease with which men could get to occupied Crimea ended with the counter-offensive.  Now the Russians are permanently on the hunt for those they either believe are ‘saboteurs’, ‘spies’ or ‘traitors’, or find convenient to designate as such.  MIHR journalists spoke with various people who had passed through the administrative border at either Armyansk or Chonhar.  In some cases, the procedure was very long, with one person noting that the Russians treated Ukrainians as though they were rubbish.  On those occasions, they were at least allowed to continue on their way, although one group was only able to get to Georgia after they paid the Russian FSB an effective bribe.  If they did not hand over the 200 USD demanded, the FSB threatened to take their car away, and the children.

In other cases, the situation was far worse.  Vladyslav, for example, was seized by the Russians at passport control because his name was on a Russian list of local activities. According to his aunt, who recounted the story to MIHR, Vladyslav had been removed from any activism for years, and the Russians were clearly using lists that were out of date.  Vladyslav was taken away, with a bag over his head, in the direction of Skladovsk where the invaders had set up a ‘prison’ in a sanatorium.

Vladyslav was held, bound and with a bag over his head, in those cramped premises for three days.  The Russians then took him away in a car.  His aunt recounts that they took the bag off his head, and he saw a pit ahead of him with a whole lot of bodies in it.  They asked him if he wanted to end up in that pit, to which he, obviously, answered no.  He was very frightened, which made his tormenters roar with laughter.  They then put the bag back over his head and held him in other place. Throughout those three days, nobody tried to question him.  Interrogation by the FSB began on the fourth day.  They had recovered all the messages that he had deleted from Telegram and threatened him, trying to get him to collaborate with them. He was interrogated every morning and tortured (beaten) every evening.  There was a whole group of torturers, he says, who beat and kicked ‘in a professional manner’, so that it almost doesn’t leave any trace. The torturers were young Russians, and he is convinced that they specially chose the worst scum, who got pleasure out of torturing their victims. He told his aunt that he had both seen and heard how others were subjected to much worse torture.

He was released after two weeks, but only after he agreed to collaborate with the Russians.  He had not yet dared to try again to leave Kherson oblast, but did tell his aunt both about his own ordeal and about other Ukrainians, including several women, whom the Russians had seized and whom he heard being tortured.  He saw how they tied one man to a tree and held him there for several days without food and water.

Another local resident who has managed to get to safety has told MIHR that the situation has changed over recent weeks, with the Russians hunting even those that they did not particularly try to touch over the last six months. This includes many veterans of the military conflict in Donbas [ATO, or the Anti-Terrorist Operation] in 2014.  The Russians are now abducting such veterans and / or members of their families.  They have seized, for example, the mother and aunt of former Ukrainian political prisoner, Oleksandr Shumkov, whom the FSB abducted and then imprisoned in Russia. Their whereabouts are presently unknown.

MIHR has also been told that there are any number of ‘arrests’, with the Russians particularly liking to seize people at markets.  They can turn up for you anywhere, according to Kostiantyn Ryzhenko, the journalist who went underground in April after it became clear that the invaders were after him. Most chillingly, he estimates that only about 30% of those seized return, with the whereabouts of the others unknown.

In one of the interviews Ryzhenko gave after his escape, he predicted that the deoccupation of Kherson will leave to the discovery of torture chambers, mass graves and places where the invaders burned the bodies of those they had tortured to death.  When all of that is found, he said, Bucha, and all the atrocities that were discovered after the Russians’ retreat, will not seem as horrific.