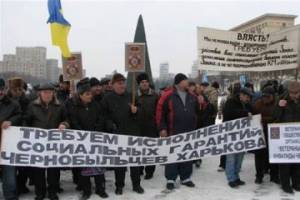 On 25 January up to 100 former Chornobyl clean-up workers began an indefinite protest in Kharkiv’s Freedom Square demanding implementation of the Law on the Status and Social Protection of People who suffered as a result of the Chornobyl Disaster.

One of the organizers, Valery Belyakov told reporters that they would be coming out each weekday despite the freezing conditions, and would continue until the government began observing the law and enforcing court rulings.

They are demanding an end to political persecution of former Chornobyl clean-up workers by means of the Prosecutor’s Office, the police and financial inspectorate. The latter, Mr Belyakov stressed, have no right to check medical records yet are snooping into confidential medical information and carrying out inspections. He alleges that Ihor Shuma, the Deputy Governor is in charge of repressive measures about the former Chornobyl clean-up workers.

As reported here there have already been attempts to obstruct participation in the activities of civic organizations and to threaten criminal proceedings over thus far spurious allegations that documents confirming Chornobyl clean-up worker status were forged. See for example , Government comes up with new form of pressure on Chornobyl clean-up workers and Chornobyl’s Ongoing Victims.

“Since there are no legitimate grounds for sending us for a medical assessment, Shurma demanded that the investigator issue a decision to have us detained and forcibly sent to Dnipropetrovsk to a specialized scientific research institute on disability issues. It’s obvious what kind of decision there’ll be.”