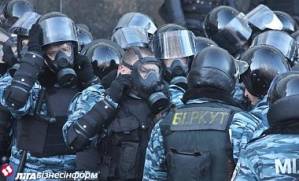 In a positive move, the District Administrative Court has agreed that the Interior Ministry must show orders and other documentation regarding the use of Berkut riot police.  On a more negative note it has rejected equally legitimate demands for information from others including the Prosecutor General and the ambulance service.

The District Administrative Court in Kyiv has allowed a civil suit demanding to see the documents which led to Berkut riot police using force against protesters in Kyiv.  The court on Monday ordered the Interior Ministry to provide the orders on the basis of which Berkut riot officers were deployed on Nov 30 on Maidan Nezalezhnosti [Maidan] on Dec 1 near the president’s administration on Bankova St; and Dec 11 on Maidan.

The suit was lodged by a non-affiliated MP Yury Derevyanko.

The documents which the Interior Ministry must provide:

The court did not, however, allow an analogous application with respect to the Prosecutor General’s Office; the Kyiv City State Administration; the Kyiv ambulance clinic and the Kyiv ambulance service.  The information and documents sought concerned the number of people who asked for medical assistance as the result of injuries inflicted on Nov 30; Dec 1 and Dec 11.

From a report at LigaBusinessInform