Three men are in detention in Kaliningrad and could face long sentences over a peaceful protest in which they raised a German flag.  Russia’s prosecution of the three is particularly incongruous given how vociferously Moscow has asserted the right of so-called separatists in the Crimea and eastern Ukraine to seize official buildings and raise Russian flags.  Silence from Ukrainians is also baffling especially since the three were no secessionists, but were protesting against Russia’s invasion of the Crimea.

Moscow’s excuses for invading and annexing the Crimea in February and March this year prompted analysts to predict copycat claims from other countries eager to also ‘regain’ territory they believed to be historically theirs.  Whether due to the legacy of World War II, or because of strong business ties between Germany and Russia,   Kaliningrad was seldom mentioned, although Königsberg was only occupied by the USSR and renamed in 1945.

It was in Kaliningrad early on March 11 that a German flag was modestly placed in a glass on the garage of the regional office of the Russian Federal Security Service [FSB].  If there was an accompanying protest, there are no photos, and no witnesses.

What is known, however, is that three men were arrested and could now face up to 7 years imprisonment.  According to Natalya Zotova writing for Novaya Gazeta,   the men are charged with group hooliganism supposedly carried out according to prior conspiracy. The charges, she notes, are the same as those brought against members of the Pussy Riot punk group.

The three activists – Oleg Savin and Mikhail Feldman from a local group called the Public Defence Committee, and a friend  from Moscow Dmitry Fonaryov are in custody in Kaliningrad.  They deny any wrongdoing and have refused to give evidence.  They have, however, corresponded with Zotova and explained that their act was in no way suggesting that Germany should take back Kaliningrad. They were only trying to demonstrate that if in the Crimea you can simply raise the flag of a foreign country, why not elsewhere?   Feldman explains that they were pointing to the double standards whereby Russia officially approves of Russian flags being flown in another sovereign state, yet if a foreign flag is raised over Russian territory, this is seen as a crime.

And punished. At first the men just ended up jailed for 10 days (Fonaryov for 25) over supposedly using foul language, a standard formulation used against activists.  It is not clear whether a criminal prosecution was always planned, and the original milder penalties used just in case of international outcry, or whether the FSB later decided that a show trial was needed to deter others.

The indictment states that the protest incited separatist tendencies and was also “deeply offensive to the political orientation of Russian Federation citizens”.  Perhaps the silence from the press in Germany is linked with trying to understand whether it is specifically a German flag that is ’offensive’, or any foreign flag. 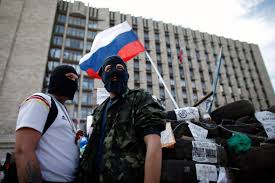 Russia’s President Vladimir Putin has been insisting for months now that the pro-Russian and heavily armed militants who have seized control of official buildings and even some cities in eastern Ukraine are fighting for their legitimate rights.  These rights, he appears to believe, include hoisting up Russian flags over official Ukrainian buildings and calling for Russian military intervention.

The FSB have discovered that Fonaryov once held far-right political views and is accusing him of having shouted “Heil Hitler” outside the FSB building and raised his arm in a Nazi salute.  There are no independent witnesses and no photos, so the FSB can say what they like.  The accusations should, however, be credible.  If Fonaryov could have suddenly reverted to long-abandoned right-wing views, it is simply preposterous to imagine Feldman, who is Jewish, having ‘entered into conspiracy with him.

The charges against the men could be worse.  According to a new Russian law that came into force on May 9, any calls for Russia to stop violating Ukraine’s territorial integrity and for action against the Russian annexation will face penalties ranging from a steep fine to 5 years imprisonment if such calls were published in the media or Internet.  We are talking here of precisely those calls, backed with Russian mercenaries, tanks and arms, which are being made by Kremlin-backed militants in eastern Ukraine.

It would be helpful if foreign diplomats and media could seek some clarity from Putin or Foreign Ministry representatives.  Why are armed militants seizing Ukrainian local government buildings and hoisting the Russian flag to be treated as freedom fighters, while three unarmed men in Kaliningrad are in custody and could face a few years in prison for a peaceful protest involving a German flag?

The argument that the answer is so clear as to make the question redundant will not wash.  The reason why no country will do more than protest over the arrest of three Russian nationals on Russian territory is indeed clear, though not why there has so far been near silence.   Failure to do little more than protest when Russia flouts all rules of international law in Ukraine can only strengthen the Kremlin’s view that it can do what it likes ‘in its backyard’.  Three men in Kaliningrad thought that unacceptable.  They’re paying for it, but were undoubtedly correct.