A Lustration Law for the Record – and the Elections 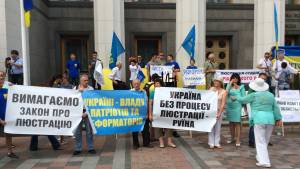 The farcical nature of Ukraine’s new Law on Cleaning up the Government [or lustration law] was demonstrated within hours of the law coming into force on Oct 16.  A list of the first 36 heads to roll was made public with the full names and positions of each person given, including those who had already resigned because they didn’t want to fall under the law.  It was all like a public executions – but of suspected witches rather than of known criminals.  Each person on the list was deemed guilty by virtue of the post he or she had occupied.

The theory is that all those people, by holding their posts during the regime of former president Viktor Yanukovych are implicated in that administration’s undoubted corruption, plundering and repression.  How true that is of, for example, the chief inspector of nuclear and radiation safety, can surely be disputed.  The other problems are the number of people who have been conveniently left off the list, as well as those likely to be quietly ‘forgotten’ about and left untouched.

The draft law on lustration was adopted by parliament on Sept 16 without the text of the law having been made public.  We can only hope that the MPs themselves knew what they were voting for and that it corresponded to the law finally revealed towards the end of September. The law has only now supposedly been sent for assessment to the Council of Europe’s Venice Commission.  That body of legal experts is highly likely to slam the entire law, but after a large number of people have been named as falling under the law.

If it’s not quietly shelved after the elections

There can be no excuse for the demonstrations of mob rule in recent months where politicians have been thrown into rubbish containers. They do, however, indicate public frustration at the lack of progress in removing – or prosecuting – those seen as directly implicated in the crimes and corruption of the previous regime.

It is unfortunately likely that those now in power felt that they needed to come up with something, or risk the voters’ wrath at the elections in late October.  It remains to be seen how the lustration process will continue once the elections are over.

Legal specialists and human rights organizations have long pointed out the major failings in the law.  Yevhen Zakharov, head of the Kharkiv Human Rights Group, pointed to the quite excessive number of posts the law regards as subject to lustration.  How can you possibly dismiss  95% of the managerial personnel of the law enforcement agencies?  Who would you replace them with for a start?

Various high-ranking officials, including the Justice Minister Pavlo Petrenko, have suggested that relatively small numbers of officials will be dismissed. This may well be what ends up happening, yet if you read the law it covers a fairly large number of people, while leaving out all the MPs who, for example, voted for the anti-protest laws of Jan 16 2014.  Nobody is suggesting that such MPs should bear anything other than moral liability for such actions. It is up to the voters to determine their future political career, however the fact that they would not be impeded from holding public office while the above-mentioned expert on nuclear safety is banned casts doubts about what this version of ’lustration’ will actually achieve.

The law as it stands covers only those in fairly senior positions under Yanukovych, or back in Soviet times.  If they go for experience, therefore, in replacing staff dismissed, they will look to people who held similar positions under presidents Viktor Yushchenko or Leonid Kuchma.  They do not fall under the law in question, but how ‘clean’ they are can probably be questioned.  Or they will go for people with very little experience, probably also basing the choice on the candidates’ political opposition to the previous regime and / or communism.

The likeliest scenario is however highly selective lustration which, like selective justice, is a travesty of rule of law.

The law already makes some exceptions which can be questioned.  It does not cover anybody elected to office.  This may be justified with those elected by the public, via elections, but is not necessarily logical with respect to the Human Rights Ombudsperson who is elected by parliament.  It also stipulates that a person must have held the position for at least one year during the relevant period.  This does not necessarily make sense, but serves to remove any suggestion that the current President Petro Poroshenko would be subject to lustration given that he held a ministerial post under Yanukovych for nine months.

The next problem, of course, is that the law does not prevent people standing for election.  The former head of the Security Service [SBU], Valery Khoroshkovsky is standing in a single mandate constituency. He can be elected, but would then be ineligible for ministerial posts, the top position in the SBU, etc.  The current Ombudsperson Valeria Lutkovska was a deputy justice minister for the first two years of Yanukovych’s administration meaning that she does fall under the law, and yet her position now does not.

There are also people, such as the present head of the SBU Valentin Nalyvaichenko and current parliamentary speaker Oleksandr Turchynov who fall under the law as graduates of the KGB’s higher institute. There is widespread scepticism as to whether the letter of the law will be applied in their case.

There is no independent body overseeing the process.  Instead decisions are taken by the Justice Ministry on the basis of checks carried out by the management of the government bodies where the specific person works.  Zakharov suggests that this will be used as a method for getting rid of inconvenient employees.

At present, however, even the word ‘check’ is of extremely limited semantic value.  Those dismissed thus far were chosen on the basis solely of the fact that their post is listed in the law.  This is worlds apart from the lustration process that took place in other eastern European countries. In Poland, for example, people’s names were revealed only if they were found to have lied to the independent body about collaboration with the previous regime.

Under Ukraine’s law as it stands, certain people will be stripped of any right to privacy on the basis of the position they held, regardless of their own involvement.  It will very likely soon become apparent that other people who should fall within the scope of the law are not touched.

In the meantime, a crucial law which should allow for a judicial overhaul is not being implemented in part because of artificial delays to forming the committee which is supposed to check whether judges have breached their oath.

One crucial task in cleaning up the judiciary which was especially compromised under Yanukovych’s regime was seen as being the replacement of court presidents, whose administrative posts had allowed them to wield enormous power over other judges and their cases.  In a worryingly large percentage of cases, the court presidents previously appointed by the High Council of Justice retained their posts.  According to Roman Kuybida from the Centre for Legal and Political Reform, dirty methods were often applied to ensure that court presidents kept their posts, however in some courts no alternative candidates were put forward with judges worried about negative consequences if they lost to the supposedly outgoing heads.

The majority of judges, prosecutors and others who played a direct role in repressive measures, corruption and so forth under Yanukovych’s administration remain in their posts.  Ukrainians have the right to a judiciary and law enforcement system based on rule of law, and to a law on cleaning up the government that is not a populist method by politicians of getting people off their back and ensuring business as usual.