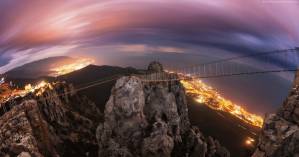 When Russia annexed the Crimean peninsula in March 2014, one outstanding question was: how are they going to ensure water, electricity, and other utilities to the population? Crimea is not physically connected to Russia. All of the peninsula’s infrastructure goes through a 6 kilometer (3.7 mile) wide strip of land – the Isthmus of Perekop – that connects Crimea to mainland Ukraine. As noted by journalist Piotr Andrusieczko, “It is enough to take one glimpse at the map to understand that it was for practical reasons that the peninsula joined the Ukrainian Soviet Socialist Republic in 1954. What is more, in subsequent decades Crimea developed primarily because Soviet Ukraine footed the bills.” Crimea gets 80 percent of its freshwater and up to 90 percent of its electricity from the Ukrainian mainland.

In those first heady days after Crimea was “reunited” with Russia, there were big plans for turning the peninsula into a casino mecca and building a multi-billion-dollar bridge to Russia. But in the meantime, Crimea was still dependent on Ukraine. Noone could reasonably expect Ukraine to make any great effort to maintain utilities to Crimea, given that it is in the middle of an economic crisis and fending off a Russian invasion on its eastern border. Russia saw the writing on the wall and immediately started drafting plans to make Crimea more self-sufficient. The “solution” will have to be some combination of developing resources on the peninsula itself, plus building connections across the 4 kilometer (2.5 mile) Kerch Strait that separates Crimea’s easternmost point from Russia. Can these large-scale changes be implemented without impacting Crimea’s unique geologic features and delicate ecosystems? The peninsula is not only a beach destination for tourists – it boasts several nature reserves that feature forests, mountains, and marine environments with diverse flora and fauna.

As soon as Russia’s rule of law came to Crimea, environmentalists raised concerns about the changes to come. As reported by Paul Goble, the watchdog group Bellona pointed out that Ukraine has signed the 1998 Aarhus Convention and Russia has not. The agreement was drafted by the United Nations Economic Commission for Europe; signatories affirm the right of the public to have access to environmental information and a venue to participate in environmental decision-making. Russia has not committed to these principles, leaving Crimea’s territory and its people at greater risk of environmental harm. The Aarhus Convention covers large-scale projects in the energy sector (such as building thermal power stations and gas refineries), water supply (groundwater abstraction and transferring water between river basins), pipeline construction, and building a variety of industries. What is Russia doing to ensure that the nearly two million inhabitants of Crimea have adequate drinking water and electricity? Will they consider the public interest and environmental protection while reconfiguring Crimea’s utilities? 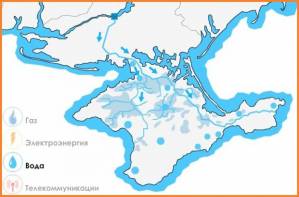 Not surprisingly, there have been interruptions in the flow of drinking water via the North Crimean Canal beginning in April 2014. The Crimean authorities prioritized supplying freshwater to the population, sometimes at the expense of agricultural producers. The Crimean Prime Minister Sergei Aksyonov was quoted at the time in TASS: “The rice situation … is the worst. Crimea is redrawing the map of crop areas in regions where irrigation may not be available. [..] No one will be left without help. We are also considering an alternative plan for drilling wells and we are working on this day and night.”

Crimea has freshwater aquifers with limited capacity and is surrounded by seawater. What exactly have the new authorities been doing “day and night” to provide drinking water? The Ukrainian newspaper Novyy Pohlyad wrote in February 2015 that “Crimea is on the verge of ecological catastrophe”. The newspaper reports:

“Uncontrolled drilling and overuse of groundwater resources has led to increased salinization of aquifers in northern Crimea. This is according to Oleksiy Yatsenko, the deputy minister of Crimea’s ministry of ecology and natural resources, [..] ‘It’s no secret that the Ministry has closed its eyes, and not only us – because all of Crimea is drilling wells, drilling without permission, licenses, plans, agreements – without anything. As a result, in the past year we have seen a substantial increase in mineralization in northern Crimea, in the Krasnoperekopsky Rayon.’ [..] In September, Minister Hennadiy Narayev, commenting on a report from ecologists about the threat of salinated soil in Crimea due to intensive use of groundwater, assured that drilling artesian wells will not harm the semi-peninsula’s ecosystem. He promised that, as the drilling program is implemented, there will be an environmental assessment, followed by appropriate monitoring and control.”

In September 2014, the Moscow Times reported that Crimean officials had proposed solving water shortages in Sevastopol by supplying the city with drinking water from a lake that lies near a municipal landfill and a reservoir that has been closed since the Soviet era because of contamination. The lake in question is located downstream of a sanitary landfill; sandy local soils cannot prevent polluted runoff from leaching into the lake, according to an unidentified water expert quoted in the article.

The development of electrical power in Crimea is equally troubling. Krym Media reports that two new thermal power plants will be constructed in Simferopol and Sevastopol, in addition to the four already operating. The work will begin in 2015 with the first phase complete in 2017 and second phase in 2018.

A public hearing was held in February in Sevastopol to discuss the planned construction on the slopes of the Fediukhin Heights. Margarita Litvinenko, member of the All-Ukrainian Environmental League (Ecoleague), and ecologist Evhen Shylin raised their concerns. Litvinenko and Shylin observed that the project has not undergone an environmental assessment, nor has an environmental impact statement been conducted. Architectural experts also showed evidence that the construction site is on land that has historical and cultural significance. Materials on Ecoleague’s website point to thermal power plants as some of the most significant emitters of air pollution, in both gaseous and particle form. The proposed electrical stations will also affect local water resources in two ways: the TPPs will be consumers of limited water resources for operations and they will discharge contaminated effluents into local water bodies.

Finally, there is the question of what will happen to Crimea’s national parks. Conservationists sounded the alarm in August 2014 when local municipalities made an attempt to turn the Opusky and Kazantypsky nature reserves into cattle pastures. As reported by Ecoleague, environmentalists appealed to the Russian Duma, advising them about the unique value of the parks and warning against making changes to their protected status. 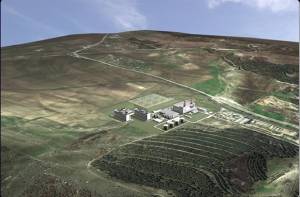 A year has passed since Russia annexed Crimea – a move that has not been recognized by any Western democracy. There’s no more talk about building a “Las Vegas on the Black Sea”. The bridge across the Kerch Strait is likely to be downgraded to a less expensive tunnel project. As Larry Hanauer wrote in theMoscow Times, Crimea is now a $4.5 billion per year drain on Russia’s budget simply to keep it afloat by funding government operations, infrastructure improvements, and workers’ salaries and pensions. And what is the benefit? Residents of Crimea, especially non-Russians and non-Christians, are losing their freedom of expression and human rights, as documented by Amnesty International.

When Western governments conduct an environmental impact assessment on a major infrastructure project, they consider various alternatives which would avoid or minimize adverse impacts. One option that must be considered is the “No Action” alternative. For example, do we think it’s a worthy venture to functionally detach a peninsula from the mainland and reattach to another nearby landmass? Looking back, it’s hard to imagine any team of sane regulators would ever give the green light to Project Crimea.

Motria Caudill is an environmental scientist with the U.S. government. She received her PhD in Public Health Sciences at University of Illinois at Chicago, School of Public Health, where she is on faculty as an adjunct associate professor.