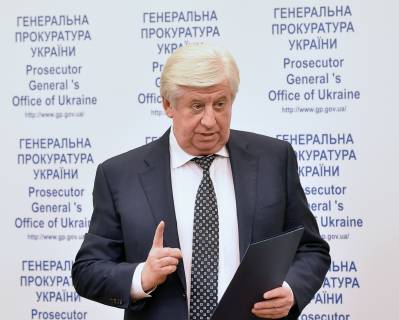 Kyiv’s Pechersky District Court has issued a warrant allowing investigators from the Prosecutor General’s Office to remove documents and other items from the Anti-Corruption Action Centre [AntAC]. They have also been permitted to demand access to confidential information from the NGO’s bank.  All of this is, purportedly, how the Prosecutor General’s Office, still under Viktor Shokin, is planning to investigate the disappearance of money donated by US and European partners for reforming the prosecutor’s service.

Vitaly Shabunin, head of the NGO’s Board, calls the move pressure on his organization and points out that they have strongly criticised the work of two of the people Shabunin says may be appointed to replace Shokin.  If the latter goes which is also looking doubtful, despite promises and his disappearance for a few weeks.

Oleksandra Ustinova, who works for the NGO, says that one of the two court rulings from March 22, enabling the investigators to receive bank information, could lead to the organization’s accounts being blocked.  There may also be other rulings, she adds, which are not recorded in the State Register of Rulings, for example, concerning surveillance and wiretapping.

Not surprisingly, the NGO staff have been removing computers, etc. from the office which they expect to face a search any time.  It is hard to believe, following the publicity about this that the Prosecutor General’s Office will seriously go ahead with the measures. The rulings make it clear that the NGO had not been called to attend the hearing and it seems likely that it was not supposed to know what was planned.

The reason cited is baffling and appears to be linked with the news on March 16 that the Prosecutor General’s Office would be initiating criminal proceedings over the possible embezzlement of 2.2 million dollars allocated by the USA and EU for reforming the prosecutor’s office.

At a briefing on March 16, Vladislav Kutsenko, a prosecutor from the PGO, announced the plans for an investigation, saying that these were because of a submission from 50 MPs wanting to know how the money had been spent.  He said that the amount mentioned which was the total of several amounts had not reached the PGO’s official accounts, and that they would be looking into where they had got to.  While too early to lay charges, they might, Kutsenko said, be looking at a crime under Article 191 of the Criminal Code (appropriating or embezzling property through abuse of official position.) It is this Article which is mentioned in the Pechersky District Court rulings (№ 757/12890/16-к ,  № 757/12893/16-к)

On that same day, the US Ambassador to Ukraine Geoffrey Pyatt responded without undue concern for diplomatic niceties.  He pointed out that the money provided by the USA had not all been paid directly to the prosecutor’s office, but to international partners.  200 thousand USD, for example, had been paid for drawing up tests for prosecutor’s office staff, and 2 million for the International Organization on Development and Labour for later use in reform of the prosecutor’s office.  It was some of this money which the Centre received for a specific project on overseeing the reform.  Pyatt reportedly stated that the USA wanted to see a real struggle against corruption from the Prosecutor’s Office, and not “open and aggressive opposition to reform”.

Pyatt is not alone in expressing open frustration with Shokin and his people.  The money used in drawing up tests guaranteed to prevent corrupt arrangements were effectively sabotaged by Shokin himself who appointed the old guard in the majority of cases.   This is just one of numerous grounds for concern.

After it seemed that Shokin had stepped down, civic activists, lawyers and relatives of Nebesna Sotnya, those killed during Euromaidan, even issued a public statement calling for a proper competition so that the fourth Prosecutor General since Euromaidan actually kept the promises they all make, including on fighting corruption.

As the end of March approaches, it is not even entirely clear that Shokin is planning to vacate his post, and the struggle at present seems more akin to an offensive against an NGO fighting corruption.