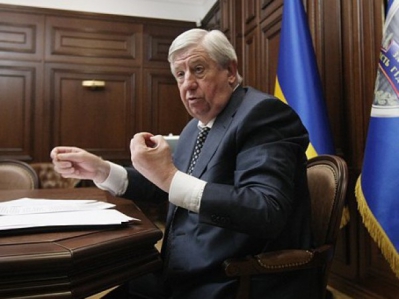 It is one year exactly since President Petro Poroshenko put forward Viktor Shokin as Prosecutor General, a post Shokin controversially holds to this day.  Shokin promised back then to conclude investigations into crimes committed under the Viktor Yanukovych regime, in particular the gunning down of protesters and other crimes linked with Euromaidan.

As another anniversary of the bloody carnage on Maidan approaches, there have been the customary announcements of ‘breakthroughs’, this time with both the Prosecutor General’s Office and the Security Service [SBU] reporting the finding of an arsenal of weapons.  This may be linked with Maidan, but it was found many months ago.  Such obvious attempts around anniversaries to come up with some proof of ‘progress’ only serve to highlight how little has, in fact, been achieved.

Back in Nov 2015, lawyers representing the families of people killed on Maidan were blistering in their criticism.  At a press conference they said that attempts by Ukraine’s leaders to imitate decisive actions around the anniversaries of Euromaidan pose a real threat to proper investigation and significantly increase the likelihood of cases collapsing at trial level, or resulting in unwarranted acquittals (details here).

The Special Investigations Department, created in late 2014, has made some progress.  This, however, is in spite of, rather than thanks to the Prosecutor General’s Office and the Interior Ministry which have both sought to gain control over a body intended to be independent.

Neither the Prosecutor General’s Office nor the Interior Ministry has reacted adequately to the damning criticism of the investigation into the disturbances and fire in Odesa on May 2, 2014.  Let’s hope it is unwarranted cynicism to anticipate the next ‘breakthroughs’ around April this year.

In an article for New Times, Oleksandra Horchinska considered Shokin’s first year in office, identifying what she called 10 ‘special operations’ during that period.  She first spoke with political analyst Volodymyr Fesenko who believes that one should assess Shokin’s first year in relation to his predecessors.  He says that there was no suggestion of reform under Oleh Makhnytsky, who held the post for 4 months from Feb 24, 2014.  Under Vitaly Yarema reform was discussed, but no more.  “Under Shokin reform has nonetheless begun”, he says, though he adds that there is considerable criticism over how the reform is going.  He considers that the Prosecutor General himself is not so much going against this reform, as trying to defend his position within its framework.

That is a kinder view than many express.  After the serious degradation of all law enforcement bodies under the Yanukovych regime, it was generally recognized as vital that proper procedure was implemented to ensure that the best candidates for prosecutor were chosen, especially those in managerial positions.  Shokin has been accused by reformers like one of his deputies, Vitaly Kasko and the Centre for Political and Legal Reform of effectively sabotaging the process.  The supposed overhaul and restructuring, in fact, resulted in 84% of the local prosecutors whom Shokin appointed being people who had previously been district prosecutors, most under Yanukovych.

One of the ‘special operations’ might better be referred to as the lack of such.  The expected, and promised, investigations into the activities of people linked with the Yanukovych regime have also not really eventuated.  Yanukovych and his closest associations fled to Russia, but a number of people who played a prominent role remained.

Among those Horchitska mentions are Serhiy Klyuev whose immunity as an MP was removed in June 2015, in order for him to face charges of abuse of power and squandering state property.  That, at least, is the theory, since he was instead allowed to escape abroad via territory under Kremlin-backed militant control.

It was learned in December last year that even the house arrest restrictions against Olena Lukash, Justice Minister under the regime of Viktor Yanukovych had been removed.  Despite having been on the wanted list over her believed role in crimes against Euromaidan activists, Lukash has only been charged with economic crimes.

Her release coincided with the disturbing circus over the detention of Hennady Korban, close associate of oligarch Ihor Kolomoisky and at the time head of a new political party UKROP.

Korban is a controversial figure, but the manner in which he was arrested, and then the 30-hour detention hearing, aroused serious concern.  Most worrying is the fact that few if any observers seriously considered the possibility that President Poroshenko had had nothing to do with the arrest. Yury Butusov’s  comments reflected concern felt by many:

“The authorities that allowed Serhiy Klyuev to freely leave the country; that have not arrested one leader of the Party of the Regions; that have not touched Yanukovych’s partner [Rinat] Akhmetov; and not one of the people who took part in handing over Donbas; nor Vilkul who broke up the Dnipropetrovsk Euromaidan, nor Kernes who dispersed the Kharkiv Euromaidan; nor businessman Grigorishin who financed the Communist Party of Ukraine – the Kremlin’s agents, … have arrested one of the open opponents of President Poroshenko.”

Unlike Korban, two high-ranking prosecutors, Volodymyr Shapakin and Oleksandr Korniyets who is a personal friend of Shokin’s are not in custody despite overwhelming evidence of major corruption.  The ‘case of the diamond prosecutors’ was one of examples cited by US Ambassador to Ukraine Geoffrey Pyatt in an address in which he expressed concern about the actions of the current Prosecutor General, accusing him of undermining reforms, blocking important prosecutions, and defending corrupt prosecutors.

That criticism has been reiterated by renowned analysts like Anders Aslund from the Atlantic Council and Hannah Thoburn from the Hudson Institute.  Aslund points out that even without other concerns, Shokin’s role in blocking reform should be enough to dismiss him.

Ukraine’s leaders are seriously jeopardizing international support and the country’s future through inability to reject corrupt dealings and old methods of political control.  These include choice of Prosecutor General on criteria of political loyalty.