16-year-old Ukrainian beaten to death by Russian prison staffRussian prison staff jailed for torturing 16-year-old Ukrainian to deathWhy would Russian Wikipedia censor information on the Donetsk Izolyatsia secret prison?2020: There was no worse year in the realm of human rights after the Revolution of DignityBandera. An Invitation to a Calmer ConversationInvestigation of individual terrorist crimesKey insurgent admits there was no civil war, just Russian aggression Next, Russia will come for the children Abducted, tortured and spending seventh Christmas in Russian solitary confinement Russian-controlled militants sentence 70-year-old pensioner to 17 years for ‘spying’ after torturing him and his familyA brief description of the KHPG strategic litigations in July–December 2020Moscow’s proxy ‘republics’ announce that Donbas is and always was ‘Russian’Russia begins its most repressive trial of Crimean Tatar journalists and activistsRussian propagandist seized by Donetsk militants ‘for spying for Ukraine’ Russia launches attack on Crimean Solidarity journalist covering trials of Crimean Tatar political prisoners Russian invaders of Crimea imprison Ukrainian for ‘state treason’Russia seeks to imprison three Crimean Tatars for 50 years on thought crime chargesUkraine’s religious freedom crushed in Russian proxy Donbas ‘republics’Czech gets 15 years on terrorism charges for fighting for Russian-controlled Donbas militantsPrisoner exchanged for Ukrainian hostages gets 17-year sentence in Russian proxy Luhansk ‘republic’
• Topics / Against torture and ill-treatment
• Topics / News from the CIS countries 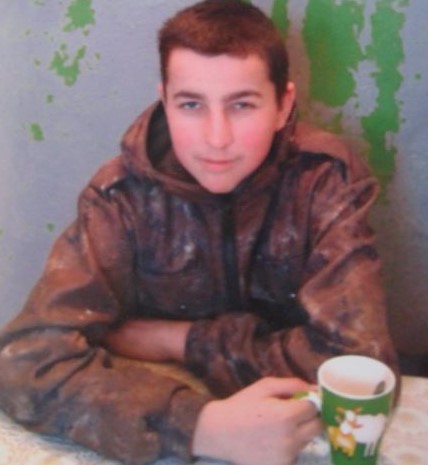 Vitaly Pop was just 16 when he died of horrific injuries inflicted by Russian prison staff following his arrival in a ‘corrective prison’ for young offenders.  He was probably picked out for ‘special treatment’ because of his Ukrainian accent, and his torturers used nationality-linked words of abuse while beating him.  A year later 10 men from the Belorechensk prison colony are on trial, though 8 of them are only accused of abusing or exceeding their powers despite the appalling torture of Vitaly and some other young lads.

That a trial is beginning at all is probably only because, after repeated refusals to call for outside medical help and claims that Vitaly had ‘abused the nurse’ and refused treatment, an ambulance was finally called.  It was the involvement of the local hospital which ultimately prevented another cover-up.  The prison staff still initially tried to claim that Vitaly had “fallen down the stairs”.

Vitaly and 6 other 15-17-year-olds were brought to the prison on Nov 24, 2015.  The prison head Vladislav Ivanov had told the staff that four of the young lads “planned to disrupt the institution’s order” and set about organizing a team to break down their will through physical and psychological torture.   Ivanov is charged only with ‘exceeding his duties’, although he not only initiated the torture, but also ordered that the ICTV cameras be turned off.

The four named did not include Vitaly.  Two of the officers have claimed that they had been informed he was a member of the Ukrainian nationalist ‘Right Sector’ organization which Russia began demonizing during Euromaidan.  It is telling that this false claim is even mentioned, since membership would hardly warrant savagely the lad.  Other prisoners have said that Vitaly was picked on for his Ukrainian accent.

Alexander Popkov, who is representing Vitaly’s mother, believes that any such ‘reasons’ were simply a pretext and that the prison officials were looking for new prisoners to torture and humiliate.

The young lads were forced to undress totally (in late November), then taken into a corridor where they were awaited by men in masks.  The men ordered them to do sit ups, then other exercises, and beat and kicked them, ostensibly if they weren’t doing them well enough.

The torturers had been instructed to avoid hitting the lads on the face in order to not leave obvious traces.

One of the seven teenagers says that he was kicked in the stomach and chest, and simultaneously beaten around the head, while being asked why he’d come, what his attitude was and what he planned to do now.

None of the prisoners showed any resistance yet were treated like this for 40-50 minutes.

The lads were forced into the latrine and ordered to clean them.  Those who refused were beaten and held headfirst in the toilet basin.  After all of this they had their heads shaved and were sent to the psychologist.  This individual – Major Irina Literova – reported only that none of the prisoners had made any complaints, though she must have been aware of the treatment they had just received.

Literova did not, however, see Vitaly Pop.  He had refused to clean the toilet, and was savagely beaten.  Up till then he had been ‘worked on’ by prison colony ‘educator’ Valery Zadneprovsky, however in the latrine Zadnevprovsky was joined by Arsen Shamkhalov and Andrei Krivolapov.  It is only the latter two who are facing charges of inflicting fatal injuries.  Radio Svoboda reports that Zadneprovsky’s mother burned her son’s clothing and shoes, and the investigators were only able to prove that Zadneprovsky had inflicted one blow (to the back).

It was in the latrine that Vitaly first lost consciousness, from multiple blows and kicks, including to the head.

They used a hose and poured water on him until the lad regained consciousness and then Shamkhalov and Krivolapov took him by the arms and pushed his head into the toilets.  The other victims have said that all three men, including Zadneprovsky continued hitting Vitaly around the head and chest.  Krivolapov is reported to have personally held his head and smashed it several times against the toilet basin.  The other lads cannot identify specific officials since they were masked, however one reports that an official jumped on Vitaly, while others say that two of the masked torturers took him by the neck and hit his head against the tiled floor.  One of the lads was ordered to urinate on Vitaly.  He says that he only pretended to do so.

Popkov reports that the indictment leaves out the testimony of the lads who survived where they mention that Vitaly was treated so badly because of his West Ukrainian accent, and that they had used insulting terms for Ukrainians as they beat him.

As reported earlier, Vitaly Pop was no hardened criminal.  He had been at school in the Transcarpathia region of Ukraine until the summer of 2015 when he and his mother joined his father who had been forced by poverty to seek employment in Kuban (Russia).  Vitaly was planning to enter a trade college, but was working with his parents.  His mother Svetlana Pop says that he had virtually no friends in Russia.  He didn’t drink and went running every evening.

Vitaly had apparently, though bafflingly, gone into a shop in June 2015, hit the shopkeeper twice on the back of her head and grabbed a gold chain.  He did nothing with it and is said to have returned it to the investigators following his arrest.

Vitaly never said anything to explain his actions, if these they were. Neighbours assumed he had got into a bad crowd, although there seems to have been no evidence of this.  Popkov was not lawyer at the time, and can say only that the lad did not deny the crime.

He was sentenced to 4.8 years, despite his age, the fact that his father was very ill, and that he had never been in trouble with the law before.  He had been held in a SIZO [detention centre]  after his arrest and obviously heard terrifying stories of how they treat people at the Belorechensk ‘corrective prison colony’. He told his brother that he wasn’t sure if he would return.

Svetlana Pop is for the moment remaining in Russia, to see her son’s killers tried.  She does not, however, have any great confidence in Russian justice.  “I saw how they treated a child”.