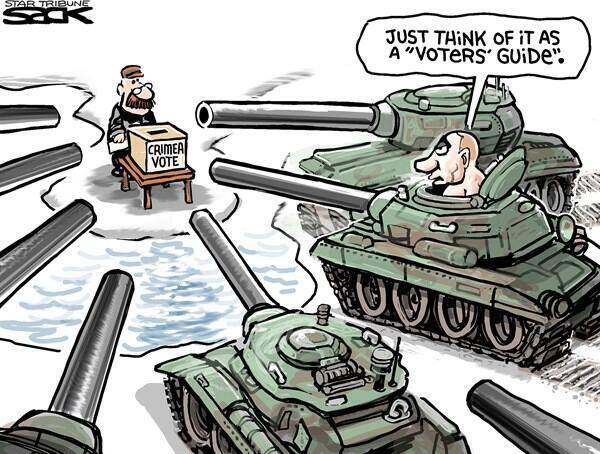 Nobody seriously doubts the outcome of Russia’s presidential ‘elections’ on 18 March, but Vladimir Putin does not want a pitiful turnout to mar the beginning of his fourth official term in office.  Just like in Soviet times, all efforts are underway to persuade or force people to give the right veneer to this electoral farce, especially in occupied Crimea where Russia is holding the elections illegally.

The Crimean Human Rights Group has reported several cases where Crimean Tatars have been threatened with dismissal from their jobs if they don’t ‘vote’.  Such a threat was issued, for example, by the state-owned October Home for the Elderly and Disabled.  A meeting was held to which only Crimean Tatars were ‘invited’.  The director asked them all to go to vote, saying that otherwise she would be forced to dismiss them ‘at their own request’, with this instruction having come from above.

In one Crimean school, a parents’ meeting was held at which all teachers were ordered to organize an exhibition of ‘pictures about the elections’.  The school head also verbally ordered the teachers to all take part in the ‘elections’ themselves.

Two sources in another city have informed the human rights monitors that school students in one school have been forced to make posters about the elections for a competition  The posters needed to be brought to school by 13 March, under the title: “Mama, Papa and I – the whole family takes part in the elections’.

The children were told that they should bring their parents to the elections and take photos underneath the children’s pictures.

Olha Skrypnyk, head of CHRG, calls all such measures flagrant violations of people’s rights and evident discrimination, with Crimean Tatars having been especially targeted.  Any such coercion would be unacceptable even in normal circumstances, however the situation here is particularly extreme since holding Russian elections in Crimea is in grave breach of international and Ukrainian legislation.

The Mejlis [representative assembly] of the Crimean Tatar People has issued a statement stressing that any such ‘elections’ are illegal on occupied territory, and taking part in them is in violation of Ukrainian legislation.  The Mejlis points out that whole sections of society  - religious figures; teachers; doctors; businessmen; public sector workers; students and pensioners - are coming under ferocious pressure, and even facing direct threats, to get them to take part.

The Mejlis points out, however, that the vast majority of Crimean Tatars are adamant that they will not succumb to blackmail and threats.

“Crimean Tatars demonstrate their loyalty to principles of international law and their unwavering position with regard to Russia’s occupation of Crimea.  They express their solidarity with all Crimean political prisoners and with the families of their murdered and abducted fellow countrymen.

Therefore Crimean Tatars will not be taking part in the illegal elections on 18 March 2018 which are being held by Russian occupiers of temporarily occupied Crimea.”

It is likely that many other Crimeans will also boycott this event, which Moscow is deliberately holding on the fourth anniversary of Russia’s ‘formal’ annexation of Ukrainian Crimea.

It is disappointing that the OSCE, while obviously not sending a mission to occupied Crimea, is sending observers to Russia.

See: How can OSCE observe Russian ‘elections’ that are being illegally held in occupied Crimea?