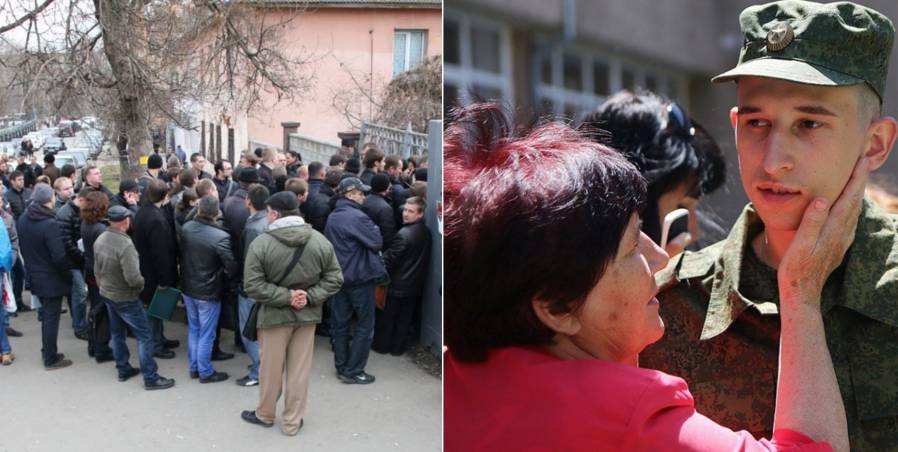 Nearly 5 thousand young Crimeans are to be conscripted into Russia’s army in 2017, with Russia thus openly flouting the UN General Assembly and the Fourth Geneva Convention.  For the first time since Russia invaded and annexed Crimea, Crimeans will be sent to regions of the Russian Federation.  Criminal liability and other measures have also been increased since April 1 against those unwilling to do such ‘military service’.   Krym.realii reports that the case was passed to the court last year of a young Yalta man who refused to serve in the Russian army.

The Crimean Human Rights Group has long warned that any conscription of Crimeans breaches international humanitarian law, and specifically the Geneva Convention relative to the Protection of Civilian Persons in Time of War.

Article 49 prohibits “individual or mass forcible transfers, as well as deportations of protected persons from occupied territory to the territory of the Occupying Power or to that of any other country, occupied or not”.  This, of course, applies also to Russia’s continuing imprisonment in Russia of Ukrainian political prisoners and its ‘deportation’ of Crimean Tatars.

Russia’s denial that it is occupying Crimea has been rejected by the entire democratic world.  The Chief Prosecutor of the International Criminal Court issued a preliminary report on Nov 16, 2016, which found that the situation with Crimea constitutes an international armed conflict between Ukraine and the Russian Federation.  Russia’s immediate attempt to reject the jurisdiction of the Court in the Hague is legally meaningless, given that this is an international conflict and Ukraine has recognized the Court’s jurisdiction.

The number of international bodies which have reiterated over and over again that Russia is illegally occupying Crimea is very long, and includes the UN General Assembly, the Parliamentary Assembly of the Council of Europe, the EU and OSCE.

The problem, of course, is that Russia will treat Crimeans who refuse to serve in a foreign – Russian – army as ‘draft dodgers’, or worse.  Olga Skrypnyk, Coordinator of the Crimean Human Rights Group is aware that the options are few.  If the young men haven’t received a draft notice, they can leave  Crimea for mainland Ukraine and serve in the Ukrainian army.  They can also cite Russian legislation which does allow alternative service, though there are strict time constraints on applying for this.

It is, however, vital that all those who receive such draft notices report them to both Ukrainian and UN bodies.  There may be little that they can do to help in individual cases, but all such information provides important evidence of Russia’s ongoing breaches of its international commitments in occupied Crimea.