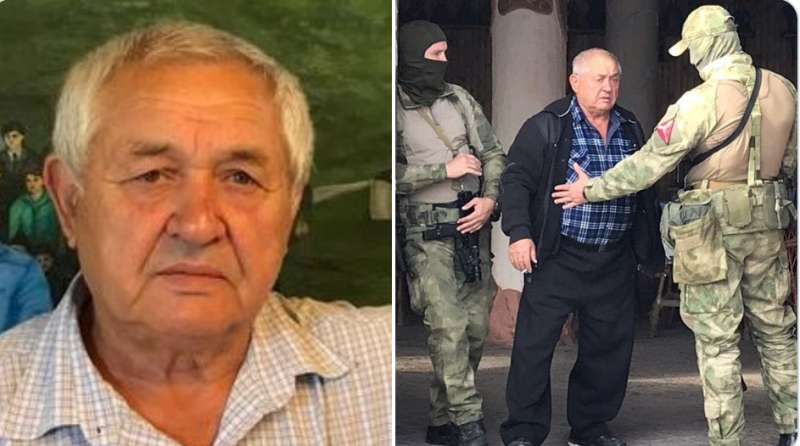 Any old charge will do in Russian-occupied Crimea when the target is a Crimean Tatar regional Mejlis leader.  69-year-old Ilver Ametov, a successful businessman and the Head of the Sudak Regional Mejlis, has already been subjected to three armed searches since Russia’s annexation of Crimea.  He is now on trial, with a WWII weapon, which is clearly a part of Ametov’s collection of historical artefacts, being used as a pretext for criminal charges under Article 222 of Russia’s criminal code (illegal purchase, possession, etc of a firearm, its component parts or ammunition).

A search of Ametov’s home in Sudak was first carried out on 2 December 2015, while he himself was in hospital.  The Russian enforcement bodies came again on 8 May 2017.  Ametov was not home, but the armed men who burst in forced his son Amet to the ground, put handcuffs on him and kicked him several times. All of this was in front of Ametov’s four small grandchildren who were clearly terrified.  Amet Ametov was detained that day, although there do not appear to have been any grounds, and it was clearly his father who was the target.

A major ‘operation’ was carried out on 27 September 2019, with several dozen armed men reportedly blocking Ametov’s home and the café he owns, while a search was carried out.   Despite the scale and methods used in this operation, it was officially only a ‘pre-investigation check’, otherwise known as an armed operation in the hope of finding anything that they could pin on Ametov.  They removed “for expert assessment” a membership document of the Mejlis of the Crimean Tatar people, the museum exhibits and various documents.  The political nature of the measure was scarcely concealed, with the ‘pre-investigation check’ on suspicion of the highly dubious ‘extremism’ norms of Russia’s criminal code (Articles 280 and 282), as well as Article 238 (production, storage, etc. of goods not meeting safety requirements).   The latter charge resulted in a fine over some bottles of cognac which staff at his café had brought in for their own celebration and which Ametov had known nothing about.

The sheer scale and number of ‘investigative’ and even ‘pre-investigative’ measures against the 69-year-old grandfather make it clear that the Russian enforcement bodies are determined to find some pretext or other.  The reason almost certainly lies in Ametov’s position as Head of the Sudak Regional Mejlis.

The UN’s International Court of Justice ordered Russia to withdraw its appalling ban on the Mejlis of the Crimean Tatar people back on 19 April 2019.  Russia is ignoring this binding order, and is instead trying to find grotesque charges against exiled Mejlis leaders, and respected members of the Crimean Tatar community.

This time they have, at least, steered clear of ‘extremism’ charges, but not of criminal prosecution.  For an obviously historical weapon, which was part of Ametov’s collection, the 69-year-old could face up to a 4-year prison sentence.  The first court hearing was held at the Sudak City Court on 29 June 2020 before ‘judge’ Yelena Andreyevna Bosi.  , but adjourned because the defence lawyer had not been properly informed, and was unable to attend.

Lawyer Lenura Engulatova has told Crimean Solidarity that they are trying to get information about the protocol drawn up over the ‘weapon’.  The body responsible for issuing licences is in a dilemma as there is no legal databasis for purchase of weapons before 2017.  Ametov bought it some time in the 1990s, but had no reason to keep the documents and receipt as it was never bought as a firearm.  Since something bought before 2017 could not have got a licence, it is absurd to say that Ametov violated the rules of firearm licensing.  For Ametov, the artefacts have cultural and historical value, and he is concerning that the enforcement bodies are not returning them.