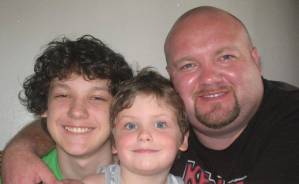 40-year-old Yury Bolotov is a private businessman, and the former director of the rock group Okean Elza.  He is married with two children.  His wife and friends stress that he is very much a family man and not engaged in politics.

He went to the demonstration without his wife, Nina and was simply observing the demonstration from Bankova St. when the confrontation began. Bolotov is one of the people who can be identified on the video footage.  He can be seen here 0:05-0:41 sitting on the ground, then being taken towards the president’s administration and beaten 0:41-0:55, then at  3:30-4:19 he’s kept there, lying on the ground)

On a Vidro Production video you see Yury Bolotov (5:03-5:07) being brought out from Bankova St; in the background others are being beaten.

On Dec 6 Amnesty International issued an Urgent Action entitled: “Detention of protesters unfairly authorised”   regarding Yury Bolotov and the eight other men remanded in custody for two months on Dec. 3.