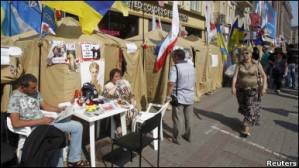 The opposition does not plan to remove tents on Khreshchatyk St in Kyiv, while in other cities courts have banned protests.

The Party of the Regions has criticized plans by the opposition to hold protests on Independence Day, 24 August.  Meanwhile the courts in a number of Ukrainian cities have banned mass protests.

The authors of a Party of the Regions statement assert that on this day people need to demonstrate “national unity and confirm the achievements of independence”.

Meanwhile the courts have already banned some protests by the opposition.

In Kharkiv an organization calling itself the Committee against Dictatorship notified the City Council of its intention to hold a rally to mark Independence Day, however the City Council banned it. In an interview to the BBC, the Deputy Head of the Kharkiv Regional Branch of the Batkivshchyna Party (Yulia Tymoshenko’s party), Valery Dudko said that the protest which the opposition were planning to hold near the Monument to Taras Shevchenko in the evening of 23 August did not entail the closure of roads or other inconvenience for Kharkiv residents. “We wrote an appeal to the Prosecutor’s office on behalf of 8 parties and 10 civic organizations since we believe that the officials in the Mayor’s Office are not fulfilling their obligations”.

In Odessa the District Court prohibited protest actions on 24 August. According to a spokesperson from the local branch of Batkivshchyna, V. Usov, the court cited the need to avoid situations of conflict.

As reported,   the Rivne District Administrative Court allowed the suit lodged by the Mayor of Rivne, Volodymyr Khomko against the Rinve Regional Committee against Dictatorship.  Khomko demanded that the tent camp be dismantled for the period from 23 to 29 August.  According to local journalists, on 29 August President Yanukovych is expected in Rivne.

Despite statements from Kyiv’s head, the Kyiv State Administration does not so far seem to have asked the court to ban the planned protest in the centre of Kyiv on Independence Day.

Its Head, Oleksandr Popov had earlier stated that the Mayor’s Office had received 23 applications from various civic and political organizations notifying of mass actions and claimed that if all were allowed it would be impossible to hold the festivities in the centre.

The Committee against Dictatorship was formed after the arrest of former Prime Minister Yulia Tymoshenko. It has called Ukrainians to gather at the Monument to Taras Shevchenko, and then march along Khreshchatyk.

On Wednesday evening Ukrainska Pravda quoted a spokesperson from Batkivshchyna / BYUT, Serhiy Odarchenko as saying that the Kyiv District Administrative Court had banned the march part of the protest action on 24 August in Kyiv.