No apparent hurry to try Gongadze murder suspectCourt decisions in Pukach case also hidden from the publicMyroslava Gongadze: “The Public should understand what criminals governed the country”CPJ: Gongadze suspect admits to killing, implicates KuchmaGongadze Lawyer: Pukach acts as though he feels protectedGongadze murder: Material on Kravchenko returned to the Prosecutor GeneralMyroslava Gongadze: They’ve taken away my right to know the motives of Pukach’s crimeCPJ: Gongadze murder suspect’s trial should be open to publicGongadze Case: 150-page indictment behind closed doorsGongadze Lawyer: Where are the “State secrets” in the Pukach trial?Gongadze Lawyer: Pukach Case closed so that Journalists don’t hear to muchOne of the aggrieved parties in the Pukach trial kept out of the hearingCourt hearing in Pukach trial postponedPukach trial to be held behind closed doorsKuchma’s lawyers get criminal investigation reopened against MelnychenkoTrial of Gongadze murder suspect to continue behind closed doorsCharges against Kuchma: Is this about murder – or politics?Ukraine’s ex-president charged over murderGongadze lawyer sees grounds for criminal charges against Kuchma - and politicsProsecutor’s Office confirms criminal case against Kuchma
• Topics / The right to life
• Topics / The right to a fair trial
• Topics / Freedom of expression 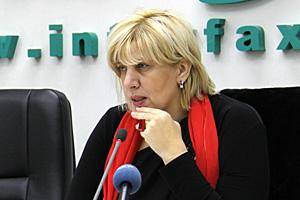 VIENNA, 6 October 2011 – The OSCE Representative on Freedom of the Media, Dunja Mijatović, said today that the Ukrainian and international media should have access to information about the ongoing trial related to the murder of Ukrainian journalist Georgiy Gongadze in 2000.

“Unfortunately, the trial that has resumed today remains closed to the media. This raises concerns about transparency. In my 13 September letter to the Ukrainian authorities, I emphasized the importance of free reporting in this ‘case of the decade’. All the circumstances surrounding the cruel murder of Georgiy Gongadze should become known and public officials implicated should not be shielded using secrecy arguments. Gongadze’s colleagues and family deserve this, ” said Mijatović.

“I accept that some court proceedings require the protection of confidential data related to national security. But the fruitless efforts of the last decade to find the instigators of this killing require the judiciary to show maximum openness at this final stage to ensure the credibility of the final verdict, ” said Mijatović.

The OSCE Representative emphasized that only vocal and resolute responses from governments to violence against journalists, bringing both perpetrators and instigators to justice, could relieve media from fear when reporting on sensitive issues of public interest.