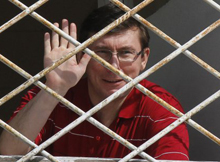 The Kyiv Court of Appeal on Wednesday upheld the 4-year sentence passed by the Pechersky District Court on the former Interior Minister and opposition figure Yury Lutsenko.  The presiding judge Ivan Rybak announced the decision on Wednesday afternoon, and said that the justification part of the ruling would be issued to Lutsenko’s defence lawyers at 15.00 on 22 May.

The detention and trial of Yury Lutsenko have been widely condemned as politically motivated.  Mr Lutsenko himself mentioned some of the discrepancies in the case on Tuesday while an analysis of the charges can be found in the Legal Monitoring of the Danish Helsinki Committee on Human Rights.

It should also be noted that a number of the witnesses complained that their words had been distorted, or that they had been put under pressure. A number of witness statements were simply read out by Judge Serhiy Vovk despite the defence’s objections given the number of witnesses whose testimony in court differed from that allegedly given and the fact that no proof was provided that the witnesses in question were unable to attend.   These are just some of the procedural concerns in this case.

Information about the Wednesday ruling and the photo from UNIAN