HRW: A Tribute to Ludmila Mikhailovna AlexeevaVeteran Russian Activist Wins Vaclav Havel Human Rights PrizeLyudmila Alexeyeva: Annexation of Crimea cast shame on my countryVeteran Russian Rights Activist Believes She Was Targeted For AttackMoscow police detain Ludmila Alexeyeva and many othersLudmila Alexeeva: There will be victims again in Russia. After all human rights defenders are considered traitors and enemies of the present systemOn duty while humanity endures
• Topics / News from the CIS countries 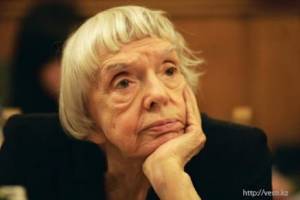 Lyudmila Alexeyeva, Russian veteran human rights defender and one of the founding members of the Moscow Helsinki Group (in 1976) turned 85 on 20 July.  Together with all her many friends in Russia – warmest wishes!

The following is abridged from the biography at Wikipedia

Alexeyeva’s worldview was significantly affected by the Khrushchev Thaw that lasted from the mid-1950s through the early 1960s. She belonged to the group of people, mostly intellectuals, who formed the dissident movement in the USSR in the 1960s. In 1966, Alexeyeva campaigned in defense of Daniel and Siniavsky, the writers who were arrested and tried for publishing their works abroad. In the late 1960s she signed petitions in defense of other dissidents who were prosecuted by the Soviet authorities, including Alexander Ginzburg and Yuri Galanskov. In April 1968, Alexeyeva was expelled from the Communist Party and fired from her job at the publishing house. Nonetheless, she continued her activities in defense of human rights. In 1968-1972 she worked clandestinely as a typist for the first underground bulletin “The Chronicle of Current Events” devoted to human rights violations in the USSR.

In early 1976, Alexeyeva became a founding member of the Moscow Helsinki Group. As a member, she signed a number of documents issued by the Group, helped compose some of them, and collected information for some of the documents. Her responsibilities also included editing the Group’s documents and hiding copies of them from the authorities.

In February 1977 Alexeyeva was forced to emigrate from the USSR. She and her family settled in the United States, where she continued her human rights activities as a foreign representative of the Moscow Helsinki Group. She regularly wrote on the Soviet dissident movement for both English and Russian language publications in the US and elsewhere, and in 1985 she published the first comprehensive monograph on the history of the movement, “Soviet Dissent”

In 1989 she again joined the Moscow Helsinki Group that was restarted after its dissolution in 1981. In 1993, after the dissolution of the Soviet Union, she returned to Russia and became a Chairperson of the Moscow Helsinki Group in 1996. In 2000, Alexeyeva joined a commission set up to advise then-President Vladimir Putin on human rights issues, a move that triggered criticism from some other rights activists

In December 2004, Alexeyeva co-founded and co-chaired, with Garry Kasparov and Georgy Satarov, the All-Russian Civic Congress which Alexeyeva and Satarov left due to disagreement with Kasparov in January 2008. Subsequently, she co-founded the All-Russia Civic Network with Satarov. As of February 10, 2009, Alexeyeva joined the Council for Promoting the Institutions of Civil Society and Human Rights under the President of the Russian Federation.

Alexeyeva has been critical of the Kremlin’s human rights record and accused the government of numerous human rights violations including the regular prohibitions of non-violent meetings and demonstrations and encouragement of extremists with its nationalistic policies, such as the mass deportations of Georgians in 2006 and police raids against foreigners working in street markets  She has also criticized the law enforcers’ conduct in Ingushetia and has warned that growing violence in the republic may spread to the whole Russian Federation In 2006, she was accused by the Russian authorities of involvement with British intelligence and received threats from nationalist groups

Since August 31, 2009, Lyudmila Alexeyeva has been an active participant in Strategy-31 – the regular protest rallies of citizens onMoscow’s Triumphalnaya Square in defense of the 31st Article (On the Freedom of Assembly) of the Russian Constitution. Since October 31, 2009, she has been one of the regular organizers of these rallies. On December 31, 2009, during one of these attempted protests, Alexeyeva was detained by the riot police (OMON) and taken with scores of others to a police station. This event provoked strong reaction in Russia and abroad.