Attempt to prosecute journalist for anti-language law graffiti at Mezhyhirya 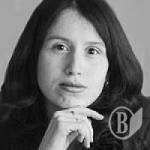 Well-known journalists Natalya Sokolenko and Tetyana Chornovil were detained early Wednesday morning outside President Yanukovych’s residence at Mezhyhirya.  Tetyana Chornovil who is also a parliamentary candidate for single-mandate electoral district No. 120 in the Lviv oblast (from the United Opposition) was charged with petty hooliganism, and Natalya Sokolenko was treated as a witness.

Opposite the entrance to Mezhyhirya (a vast estate) Tetyana Chornovil wrote the words: “Yanukovych, language is your sentence. Don’t sign!”  [The words refer to the highly controversial language bill which significantly increases the role of the Russian language, and which now only requires Yanukovych’s signature to become law).

She explains that she wrote this on the road in yellow paint with the letters about a metre in length. It was her personal protest, she stresses, and Natalya Sokolenko was there as a journalist to cover the event.

“We were detained first by traffic police officers who took us to the Vyshhorod Police Station, then we were passed to the court”.

She was charged under Article 173 “petty hooliganism”, though points out that the article in no way corresponds to the situation.  Article 173 is about using obscene language or immoral behaviour.

The Article carries with it either a fine or up to 15 days administrative arrest (i.e. imprisonment).

Fortunately, sanity did prevail and the Vyshhorod District Court did not find any administrative offence in the journalist’s action.

“During the hearing the judge asked me about the motives of my actions. I denied any offence since Article 173 entails obscene abuse, immoral behaviour or other actions. In this case I see nothing of the sort. A was polite with those responsible for public order. And if they begin prosecuting for words written on asphalt then you could begin holding children who write with chalk to answer”.

Furthermore, she said, Ukrainian citizens have the right to protest, self-expression and freedom of speech. “How at present can journalists make themselves heard to Yanukovych if there are no press conferences and if he doesn’t react to even the most scandalous journalist investigations, and you can’t even ask him questions?  I thought that this way was the most accessible to make myself heard by Yanukovych. Because he regards the road I wrote on as his personal property. Because huge amounts of public funding were spent on its reconstruction when he was in government. The authorities exert as much pressure as the public allow. If the public came out at least for small protests, there wouldn’t be such steps that destroy the economy and national dignity.

From reports at Ukrainska Pravda and Telekritika