Concern over reduced right of judicial review in new Criminal Procedure Code"Law enforcement system not ready for implementation of new CPC"Deals with investigators – progress or grounds for corruption?Parliament advised to revise draft Criminal Procedure CodeAI: Parliament must strengthen safeguards against torture in new CPCForward to a jury system or back to people’s assessors?Verkhovna Rada refuses to support trial by juryOne month under the new Criminal Procedure CodeMajor reduction in number of remand prisoners under new CPCNew CPC restricts right of choice of defenderUkraine’s penitentiary institutions and the warCall for Russia to be expelled from INTERPOL after Ukrainian journalist detained in Turkey Zelensky urged to veto law that puts Ukraine on track for more damning European Court judgments 20-year-old Crimean Tatar ‘arrested’ on grotesque charges three months after Russian occupiers abducted himRussian criminals serving huge sentences ‘pardoned’ and freed after fighting against Ukraine While bombing Zaporizhzhia, the invaders announce plans to take Ukrainian children to Russia for ‘rehabilitation’ Mariupol, an Example of GenocideIzium Mass Graves: Tortured victims with bound hands and entire families killed by the Russian invaders Vovchansk Engineering Works: Dungeons on the Chechen ModelEffective death sentence against veteran Crimean Tatar activist for opposing repression in Russian-occupied Crimea
• Topics / The right to a fair trial

New CPC not as black as it’s painted 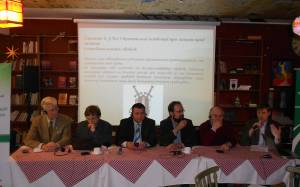 At a meeting between lawyers from the USA, Canada, the UK, Georgia, Russia and Ukraine to discuss the role of the defence in criminal proceedings, attention was given to criticisms heard of the new Criminal Procedure Code.

Defence lawyers pointed to the reduction in their rights, forgetting that they should be concerned with the rights of defendants in the criminal process. As Arkady Bushchenko from the Ukrainian Helsinki Human Rights Union put it, “After all those representing suspects in court cannot have more rights than those whose interests they’re representing since that’s illogical”.

He calls the removal of the possibility of court appeals against a decision to initiate a criminal investigation logical. At the initial stages of the investigation nobody is entitled to say definitely whether the person is guilty of committing the crime or not.

He says that such things are taken very badly by Ukrainian lawyers since they’ve been a big blow to their pride.  He adds that the new CPC was a shock for Ukrainians since it wrenched many participants in the criminal process out of their comfortable state where they could just sit out the proceedings. Now they have to work.

“It’s because of the reluctance of law enforcement officers, judges and lawyers to adapt to new norms of legislation that this progressive document could end up in six months cancelled. We’ll end up being returned to the old legislation”, Mr Bushchenko warns.

He sees the failings of the new CPC lying mainly in the large scope of the Code meaning that not all those who want to can read it right through. He is convinced that the Code is not as terrible as it’s painted.

His view is shared by European and American lawyers. Jeremy McBride, Chair of the Scientific Committee of the European Union’s Fundamental Rights Agency which carried out an assessment of the new Code considers that is adoption increases the chances for improving the human rights situation.

The role of the defence in the criminal process has increased considerably and they now have the right to carry out their own investigation.  At the same time their level of responsibility has also increased with this helping to improve the quality of legal services.  He says that complaints from defence lawyers that there is no norm defending their rights are incomprehensible since the priority is the right to a fair trial of their clients which the lawyer should ensure.  He adds that most European countries have criminal procedure legislation based on this logic. “The main thing now is for Ukrainian judges, prosecutors and defence lawers to re-think their own steps in accordance with the new CPC. The court should begin treating submissions from Prosecutor s with scepticism, and this should result in an increase in the number of acquittals”

Edward A. Racker, well-known US attorney believes the new CPC will force the prosecution and defence to work more actively. “One will begin gathering evidence of the suspect’s guilt better, but the other evidence refuting this. The judges will have to be more demanding in their attitude to both parties. This will increase the guarantees that innocent people will not end up behind bars.