New CPC not as black as it’s paintedConcern over reduced right of judicial review in new Criminal Procedure Code"Law enforcement system not ready for implementation of new CPC"Deals with investigators – progress or grounds for corruption?Parliament advised to revise draft Criminal Procedure CodeAI: Parliament must strengthen safeguards against torture in new CPCForward to a jury system or back to people’s assessors?Verkhovna Rada refuses to support trial by juryMajor reduction in number of remand prisoners under new CPCNew CPC restricts right of choice of defenderUkraine’s penitentiary institutions and the warCall for Russia to be expelled from INTERPOL after Ukrainian journalist detained in Turkey Zelensky urged to veto law that puts Ukraine on track for more damning European Court judgments 20-year-old Crimean Tatar ‘arrested’ on grotesque charges three months after Russian occupiers abducted himRussian criminals serving huge sentences ‘pardoned’ and freed after fighting against Ukraine While bombing Zaporizhzhia, the invaders announce plans to take Ukrainian children to Russia for ‘rehabilitation’ Mariupol, an Example of GenocideIzium Mass Graves: Tortured victims with bound hands and entire families killed by the Russian invaders Vovchansk Engineering Works: Dungeons on the Chechen ModelEffective death sentence against veteran Crimean Tatar activist for opposing repression in Russian-occupied Crimea
• Topics / The right to a fair trial

One month under the new Criminal Procedure Code 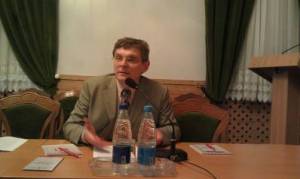 Arkady Bushchenko, Defence lawyer and Executive Director of the Ukrainian Helsinki Human Rights Union, was asked in a recent interview to assess one month after the new Criminal Procedure Code came into force what has changed as predicted, and what not.

Arkady Bushchenko points out that it’s hard to judge since a large number of cases are still being examined under the old Criminal Procedure Code [CPC],

He says however that procedural agreements on admitting guilty are now being actively used and some lawyers have already had experience of using this norm.  “My colleague, for example, reached agreement with the Prosecutor’s Office and as a result the person got off with a fine of 850 UAH (less than 100 EUR).”  He says that there were grounds for fighting for a full acquittal but the client didn’t want to expend the energy needed, and the time.

He says that there recently reports that the number of rulings to remand people in custody as a preventive measure had fallen four times.  Since the figures were given by officials with authority, one would like to believe that they’re correct.

There is a problem with the Transitional Provisions according to which for a certain period both new and old CPC norms are in force.  This is a legal nonsense which you won’t find anywhere in the world.  He expresses the hope that the new parliament will regulate the situation.

“Of course some fears remain since we have new procedure, but old players. Therefore without reform of the Prosecutor’s Office; launch of a system of legal aid; without comprehensive reform of the courts it could all end badly.

There will be resistance, he adds, and for 6-9 months there will be ferment as with any system under reform. There will also be the temptation to return to old ways.

Asked for his comment on assertions that the new CPC doesn’t suit Ukrainians’ mentality, Bushchenko noted that in some things the Code has been adapted.  He points out that norms in the USA or UK are much broader, without exhaustive detail, this being left to the judge.  In Ukraine many colleagues pointed out quite rightly that Ukrainian judges won’t work like that, they need detailed instructions. This, he says, was taken into account, and the Code is extremely detailed.  Many norms, he explains, are set out in one sentence in normal civilized countries, but require a page and a half of detail in Ukraine to make sure that the police, judges etc treat it within the correct framework. “This excessive detail is a concession to our mentality, general legal ignorance, frequent corruption and lack of conscience”.

A legal aid system is beginning to function whose lawyers will provide defence in 85-90% of criminal cases.  Bushchenko stresses that the system includes collection and exchange of information.  He is in the working group responsible for this and can see that there is considerable progress.  The system began at the beginning of this year.  This, he says, has been one of the few examples of what really can be achieved in Ukraine. He believes these lawyers, working together within this system will really be able to have impact on practice. “This is effectively a counter to the Prosecutor’s Office which is a powerful system with its own clan mentality, convictions and so forth.”

With respect to concern about the norm allowing defendants to enter into agreements with the Prosecution leading to people simply not asserting their innocence, Arkady Bushchenko acknowledges the substance of such arguments which he says have been presented for 100 years.  If countries had unlimited resources, he says, the argument would be valid, but even the USA does not have enough, and they understand that swift pre-trial regulation of conflict, for example, between an offender and the State is needed.

There are, he explains, a number of guarantees against confessions of guilt being beaten out of people which did not exist before. He points out also that such agreements were possible before, as well as other norms, but were not applied often enough.

With respect to the agreement where a person admits guilt, a defence lawyer must be present. The person must also have his rights explained to him as well as the consequences of the agreement.  He must also be told clearly that once the court has approved the agreement, he loses any right to call witnesses, appeal against a sentence on the basis of facts incorrectly presented. There are no greater guarantees anywhere in the world, he says.

Arkady Bushchenko fears that attempts to introduce amendments which will change the ideology behind the new CPC will prove successful. The Prosecutor’s Office lobby, for example, is very strong. They find it convenient to stay with the old CPC.

Much abridged from the interview (where many of the questions pertain to misunderstandings about the CPC; claims, which Bushchenko demolishes, that removal of the right to appeal against initiation of a criminal investigation somehow encroaches on people’s rights, and others. )