Ukraine: the book scandal that never was 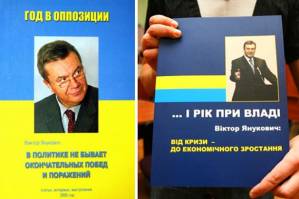 There are politicians whose memoirs are such guaranteed bestsellers that publishers will happily make deals in advance.  In advance, that is, of the book being finished.  Not of a book perhaps being written – or perhaps not.

Eyebrows had been raised back in April 2012 over the staggering royalties paid by the Donetsk firm “Novy Svit” (Russian: Novy Mir) for 2011.  The payment was “for the copyright passed to this publisher on the books from 2005-2010 ("A Year in Opposition";and three others) as well as for books written in the future by Viktor Yanukovych”..  The money, we were told, was to be given to charity.

Now eyebrows are normally raised just once, not fleetingly on an annual basis with attention soon safely diverted elsewhere.  The questions over such extraordinary earnings were already more muted in early April this year, although still heard.  After all, the explanation last year had been that the fee was for life-long rights.  Now it transpired that this was something of a retainer fee, albeit on a scale which would bankrupt most international publishing firms.  It seems that at least in the case of advances, it is the publisher who deals with any tax issues.

The few remaining media publications and television channels prepared to touch such a subject learned from writers that royalties on such a scale, even for books actually published, were unheard of in Ukraine.  Olexander Afronin, President of the Ukrainian Publishers and Booksellers Association,  told Ukrainsky Tyzhden that in his view such royalties could be viewed as a political bribe.

Then on 12 April an article appeared in the authoritative weekly Dzerkalo Tyzhnya entitled “Unprinted Yanukovych”.  Viktor Trehubov describes Viktor Yanukovych’s literary career, and sets the amounts  thus earned against the royalties which popular writers in Ukraine and abroad can hope for.

He points out one other crucial detail.  The Donetsk-based firm is not, in fact, a publishing company, but a limited liability printing firm (drukarnia). The company whose website can be found here  appears to print all sorts of packaging, advertising material, newspapers and journals, but not books.  Dzerkalo Tyzhnya were told they should speak with the Deputy Director Edward Vakulenko regarding the President’s books, but found  Mr Vakulenko’s phone always turned off.

Everything ripe, you’d think, for a grandiose scandal and some very hard-hitting questions.  Not, however, in Ukraine.

A deeper problem is lack of any belief that scandal can achieve anything. There have been plenty of shocking articles revealing, for example, the machinations through which the former State residence of Mezhyhirya has now effectively become Viktor Yanukovych’s private property

No heads roll, no changes are made and certainly no answers are given.  In fact, if anybody suffers, it’s the journalists for having the temerity to carry out such investigations..

Much was made of the Public Information Act in force since May 2011.  This was hailed as an opportunity for officials and public spending to be kept firmly in the public eye.

Scrutiny there is with the above-mentioned journalist investigations widely read and discussed on Internet forums, social networks, etc.

There appear to be no mechanisms in place for verifying the information on income declarations and the like, nor for liability where information is incorrect, incomplete, etc. While in principle civil suits are possible where information requests are turned down, and some have been successful, the more delicate the subject matter, the more far-fetched the reasons given for refusing to provide it.  Ukrainska Pravda journalist, Serhiy Leshchenko, for example, has been forced to apply to the European Court of Human Rights in order to receive information regarding public funding pertaining to the President’s controversial residence at Mezhyhirya.