AntiMaidan stage real protest over not being paid 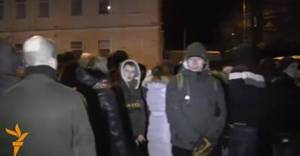 Several dozen people held a protest through Sunday near the Party of the Regions headquarters on Lypska St in Kyiv. They are angry that despite promises, they haven't been paid for taking part in the pro-government rally in Maryinsky Park.

One of the protesters told Radio Svoboda that he was owed a thousand UAH [a little less than 100 EUR],  Some say that without the money owed them they can't get back home (to Sumy, Chernihiv, Donetsk.

Participants of the rally in support of Viktor Yanukovych in Mariyinsky Park packed up their tent city on Sunday “in order to spend the New Year holidays with their families” and, according to a report on the Party of the Regions website, called on the EuroMaidan protesters on Maidan Nezalezhnosti to do the same.

A week ago, during the Dec 14 rally on European Square, the pro-government protest was declared indefinite.