The meeting reported below was cancelled, a few hours after it was widely reported mainly in Ukrainian, but also here in English, on Facebook.  Whether or not a coincidence, much welcomed!

Kateryna Korotchenko, head of the Zaporizhya branch of the NGO European Youth of Ukraine and EuroMaidan activist has received an official summons from the Zaporizhya SBU [Security Service].   She is called to a “talk” on Monday, Dec 30 at 10.00 “to provide an explanation for publications in the social network Facebook”. 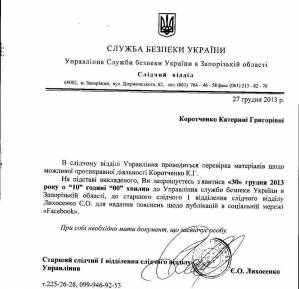 According to Ihor Zubko, a Zaporizhya rights activist, Korotchenko was handed the summons near the Zaporizhya EuroMaidan.

He calls such “invitations” to the SBU an attempt to intimidate young people and deter them from civic activity. He is planning to accompany Korotchenko and calls on other human rights activists to join him.

A flash mob in support of the young activist is also planned at 10.00 outside the SBU office at 62 Dzerzhynsky St,

Zubko notes that the same SBU investigator who handed the summons to Korotchenko was in a group carrying out “prophylactic talks” (in Soviet style) with civic activists after the controversial bust to Stalin placed in the premises of the Zaporizhya communist party was blown up.

There have also been reports that Zaporizhya EuroMaidan activists have been summoned for questioning by the police.