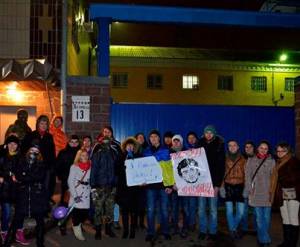 Outside the Kyiv SIZO [remand prison] on New Year’s Eve

The continued prosecution of Road Control’s Andriy Dzyndzya and Viktor Smaliy; AutoMaidan activist Volodymyr Kadura, and Yaroslav Prytulenko suggests that the amnesty law now in force is as empty as most commitments made by the current regime.

A moving New Year address from the people to the president * begins with a grandfather explaining that he would prefer not to be standing on cold Maidan [Nezalezhnosti] in Kyiv but at home with his wife and their grandchildren.  He and his wife had no choice, however, but to come to Kyiv when they saw young people being beaten on Maidan.  Many of those who addressed the president, Viktor Yanukovych, spoke of 2013 having shown them that in Ukraine young people can be thrown behind bars without a scrap of evidence.

The promises from the president, Viktor Yanukovych, that there would be a proper investigation into the violent dispersing of peaceful protesters, many young students, on Nov 30 have thus far resulted only in the dismissal of scapegoats and attempts to blur the issue.  The amnesty bill signed by Yanukovych into law on Dec 26 has also remained essentially on paper.

Yaroslav Prytulenko is the only one of the first nine men arrested after being beaten by Berkut riot police during the Dec 1 disturbances on Bankova St.  Most of the men were seriously injured, with video footage showing three of them being beaten while lying on the ground showing no resistance. Not one bore any resemblance to the young masked louts who actually caused the disturbance outside the president’s administration.  The appeals, including from Amnesty International, and international concern resulted in Yanukovych promising that “some of the men” could be released from detention.

Within a day or two eight of the men had been released, although only two agreed to accept lesser charges and a fine in order for the cases to be dropped altogether. Six were released pending trial.

21-year-old Prytulenko is much younger than the others and was not badly injured.  There is no evidence that he took part in the disturbances.  He seems to have been charged on the grounds that he was wearing protective clothing, probably a helmet, which would not be uncommon for a person into cycling and extreme sports.  He alleged had a bottle with petrol, a shock pistol and knife in his backpack.  There were a huge number of procedural irregularities in the detention and it is disputed whether all those items were in the pack.  There is any case nothing illegal per se in possessing any of those items.

The claim that he showed resistance when being detained is made by the same Berkut officers whose violence led to a number of peaceful protesters receiving very serious injuries.  It seems at very least possible that Prytulenko has been targeted as a scapegoat to justify the arrests, and not draw attention to the shocking treatment innocent protesters received from Berkut riot police.

The arrests of three other men are more sinister.  The disturbances on Bankova St are widely believed to have been orchestrated, and Dmytro Korchynsky, whose organization is known for organizing provocation aimed at prompting a police crackdown, can be seen clearly on video footage.  Suspicion that people in high places were behind the disturbances are fuelled by the only two arrests made.

Volodymyr Kadura is a businessman and activist of the AutoMaidan protests (car drivers in support of EuroMaidan) and well-known Road Control journalist Andriy Dzyndzya are accused of involvement in bringing the bulldozer used in the disturbances to Bankova St.  The two men are not acquainted, but they share one thing in common – the degree to which their activities have doubtless riled the police.  In Dzyndzya’s case, it is clear from the video footage that he was covering the events as a journalist.

Dzyndzya and his Road Control organization are well-known and there were protests over his detention and the police refusal to allow his lawyer to see him on Dec 5. There was even more outrage in court the next day when despite serious procedural infringements, judge Volodymyr Buhil announced that he was remanding Dzyndzya in custody for two months.

The rumpus in court was used to bring charges against Dzyndzya’s lawyer, Viktor Smaliy, who has now also been remanded for 2 months and charged with attempted murder of the said judge.

The charges against Dzyndzya and Smaliy have coincided with two very serious attacks on other representatives of Road Control, a civic initiative which monitors the work, and frequent infringements of the law, by the traffic police.  One prominent journalist received political asylum in the USA in November, and another is not planning to return from Poland, understandably fearing arrest or attack in Ukraine.  All of the latest prosecutions and attacks seem aimed at destroying an organization which has been active - and successful -  in highlighting contempt for the law and citizens’ rights so often demonstrated by law enforcement bodies.

The New Year address to Yanukovych was made because Ukrainians have had enough of empty promises on the one hand and repressive measures on the other.  There are many other people currently imprisoned in Ukraine, either on politically motivated charges or for reasons to do with a law enforcement and court system which has gone seriously askew.  In the case of the four men mentioned here, an amnesty law is in place and pressure is needed, included from the international community, to make sure it is used and the men freed.