Maidan activist stripped naked by Berkut back and staying 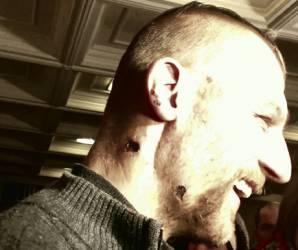 On Friday the Maidan activist, Mykhailo Havryliuk who was stripped in freezing temperatures and beaten by Berkut officers told journalists of his ordeal and of his determination to keep fighting.

Havryliuk was released thanks to the efforts of Afghanistan war veterans and AutoMaidan activists.  As reported, after detaining the EuroMaidan self-defence officer on Thursday, Berkut and other enforcement officers undressed him and videoed him standing naked in the snow.  The video - www.youtube.com – was made public and led to the interior ministry issuing an “apology”.  No information about dismissals was provided.

At the press briefing, Havryliuk explained that he was one of the last to retreat as he was trying to help a person injured by a grenade.  They ceased him, he recounts, and began beting him. They threw him to the ground, and took photographs of themselves standing with their foot on his head.  They beat him in turns, and then one of them suggested cutting off his Cossack-style scalp lock.

Havryliuk says that there were a few of the officers who after a bit started telling the others to stop beating him, but the others didn’t pay any attention.

He says that after they got sick of beating him, they dragged him into a police van and took him to the police station. He lost consciousness several times on the way, then an ambulance had to be called and he was hospitalized. “Afghanistan War veterans came for me to the hospital and it was thanks to them that I could get out of the hospital, and then a guy from AutoMaidan picked me up in his car.

He is feeling weak still, but militant and determined to continue fighting.

If the fact that Havryliuk was rescued from hospital should seem strange, in the present situation it is unfortunately quite understandable.  The funeral took place on Friday of Yury Verbytsky, a EuroMaidan protester who was abducted from hospital together with well-known journalist and civic activist Ihor Lutsenko.  Lutsenko was found badly beaten but alive.  At the tme Lutsenko said he had been saved by his high profile and the publicity over his abduction.  He also reported having seen Verbytsky getting particularly savage treatment because he was from Lviv.  Yury Verbytsky's badly beaten body was found in the Boryspil forest on Wednesday.

Both in connection with the confrontation on Hrushevsky St, and earlier , protesters have ended up in hospital after being badly beaten by Berkut officers.  In the case of the Bankova Prisoners, the charges laid against peaceful protesters were especially monstrous given that almost all of them ended up in hospital with very serious injuries only to find themselves accused of "organizing mass riots" and remanded in custody for 2 months..