Yevgeny Novitsky: I’m a foreign agent and I’m proud of it 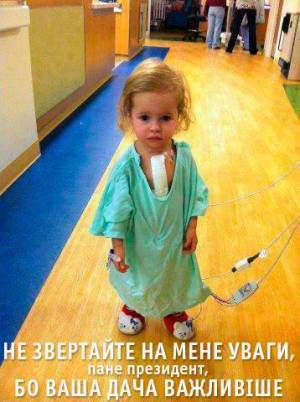 The caption reads: Dont’ pay attenton to me, Mr President because your dacha is more important

Addressing a rally in Simferopol (Crimea) on Jan 17, Yevgeny Novitsky stated that he became a “foreign agent” when his son was diagnosed with leukemia and he is proud of it.  He was speaking a day after the ruling parties in parliament pushed through anti-protest laws, one of which demands that all civic organizations receiving foreign funding register as “foreign agents”, submit quarterly reports and pay corporate tax on grants received.

Novitsky’s words are better than any analysis.

“I am a foreign agent and I’m proud of it.

16 years ago my son was diagnosed with leukemia.

He needed very expensive medicines which the hospital didn’t have.

People from the USA, Germany and other European countries helped our family to buy them.

I was later able for more than 10 years to help other families beset with the same misfortune.

Together with other volunteers we sought huge amounts of money for a child who needed treatment abroad costing around 200 thousand dollars.

Each time we managed to gather the amounts needed!

Once again with help from Europe and the USA, countries where people for some reason really wanted young Ukrainians to overcome their illness and survive.

In this coming year children with cancer will need “foreign agents” more desperately than ever before since the budget supposed adopted on Thursday only allocates 50 million UAH for the entire year.

This is over 4 times less than the 216 million which we managed to squeeze out of them for funding child oncology during 2013.

For comparison, the Interior Ministry has been allocated 18 billion UAH, almost 40 times more.

Yet again volunteers will have to look for (and find!) incredible amounts of money from people in other countries.

I am therefore happy to be a foreign agent.

I am an agent of American practicality and decisiveness when it comes to helping one another.

I am an agent of European charity towards those around them; of European ideas about the value of life, about human dignity and rights.

There should be European laws in Ukraine, and not those which representatives of EU and European Parliament condemned this morning.

And we will not allow it. Nobody will foist their laws on us, their ideas about freedom, about the rights of those in power and human rights.

Ukraine will be free!”