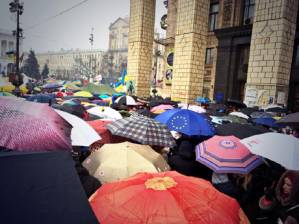 On Sunday EuroMaidan activists held a flashmob with umbrellas to show solidarity with the beleaguered Russian TV channel Dozhd.  Around 40 people were reported detained after a similar flashmob in Moscow on Saturday.  The “seditious” event involved activists standing with opened umbrellas.

On Sunday Ukrainian activists stood in different parts of Maidan Nezalezhnosti, as well as on adjoining streets. They all had umbrellas opened and chanted “We’re with you, Dozhd”.

The TV channel is Russia’s only independent cable news channel and a vital source of information in a country where the media, especially television, is effectively under state control.

Russia’s main satellite television provider Tricolor TV has said it will be cutting the channel off from Feb 10.  Many other providers have already dropped Dozhd from their television packages.

The pretext for this move was an online survey carried out by the channel around the 70th anniversary of the Siege of Leningrad.  It asked viewers whether the USSR should have surrendered the city in order to save lives.  800 thousand people died during the Siege.  Although the survey was removed, there were calls from ruling party MPs to have the channel investigated for so-called ‘extremism’.

If Tricolor goes through with its threat, the channel will be left with a mere half a million viewers.  It has been available to over 17 million.

It seems likely that the real motive is to remove an independent and critical news source which has given coverage to political protests. repression, and voices critical of the Putin regime.