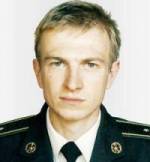 Serhiy Koturin, a soldier at a Ukrainian military base in Simferopol died when the base was stormed on March 18, shortly after Vladimir Putin signed the document annexing the Crimea.  Ukraine’s Defence Ministry says that the attackers were in Russian military uniform.

Serhiy Koturin was 37 and married.  His wife is due to give birth to their second child in two months. Serhiy had transferred to the Photogrammetric Information Centre last summer.  He was killed by a single bullet wound to the heart.  Following Serhiy Koturin’s death, Kyiv removed its ban on military servicemen using arms.

Below are the bank details provided by the ministry for anybody wishing to help Serhiy’s widow, Olena Koturina, her son and unborn child.