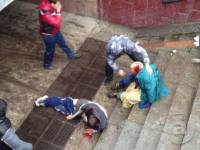 In Kharkiv on Sunday afternoon, around 1 thousand people who had just taken part in a rally in support of Ukrainian unity were attacked from all sides by a few hundred young men with St George ribbons and baseball bats.

Witnesses report that a police cordon on one side kept the thugs off, but they managed to attack from Shevchenko Park.

As the photo show, the assailants caught people who tried to hide in the metro, and beat them.  Interfax Ukraine reports that women with St George ribbons then set upon the people attacked, shouting that they were “scum” [nielyudi].

According to the police press service report issued on Sunday evening, 50 people were injured, including a police officer.  10 were taken to hospital.

The police also report that the so-called separatists have split into two groups with one group, around 100 people, smashing the gates and breaking into the courtyard of the Kharkiv City Council.  Around 2 thousand others have headed to the Kharkiv SIZO [remand unit] and are demanding the release of others detained on April 8 during an operation to free the seized regional administration.

All those detained on April 8 have been moved to the SIZO in Poltava.