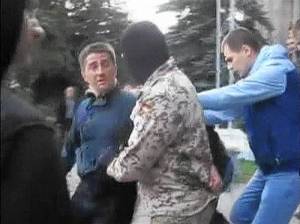 Reuters shot of Rybak surrounded by the militants

The widow of Horlivka City Council deputy Volodymyr Rybak has taken her 13-year-old daughter and left the city out of fear of provocation against members of her family.

As reported, the bodies of Volodymyr Rybak and 19-year-old student Yury Popravko were discovered in a river near Slovyansk on April 19.  Both men had sustained horrific injuries before being thrown into the river unconscious.

Two days ago another body was reported found, though it has yet to be identified.

There is little scope for doubt as to who was behind the killings, especially in Rybak’s case. He had been at a rally on April 17 in support of Ukrainian unity outside the city council building.  There is video footage as well as witnesses’ reports of how he got into conflict with pro-Russian militants after he tried to take down the flag of the self-proclaimed Donetsk People’s Republic.  A witness reports that a car then drove up and Rybak was pushed into it. .