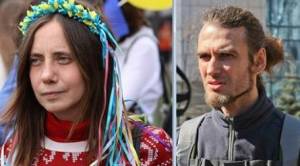 Anna Mokrousova, freed this morning, has told Radio Svoboda that the pro-Russian militants who abducted her and fellow Civic Sector activist Alexei Beda on Saturday have been wound up by stories about the right-wing nationalist Right Sector party.

She says that they were abducted near the regional SBU [Security Service] after somebody recognized Beda.  They took her phone away.  As reported on Saturday evening, one other activist in Luhansk received calls supposedly from Mokrousova asking him to come and bring her car keys.  He was rightly suspicious and did not go.

Mokrousova says that they were treated fine, and that in fact they could have been released late on Saturday evening, but there is a curfew in place, so the release was put off till the morning.

She says that there are a number of armed people on the streets at present and the authorities are not visible. She is planning to try to establish contact with members of other political parties to find a peaceful solution to the situation.