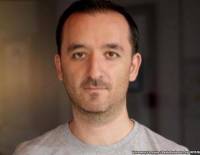 Reports in the early hours of May 19 suggest that Osman Pashaev, founder of the Crimean Internet channel CrimeanOpenCh and other members of the media have been released.  As reported, Pashaev and Turkish cameraman Dzhengiz Tizgin had not been seen since the remembrance gathering on May 18 in Simferopol, which Pashaev was broadcasting live.

It was later learned that Pashaev and others were at the central police station. As of  around 22.00 on Sunday evening lawyer Emil Kurbetdinov and the head of the legal department of the Mejlis of the Crimean Tatar People had been trying in vain for over two hours to see Pashaev.

This seems to refute information circulating earlier that Pashaev had been interrogated by FSB officers and the department for fighting ‘extremism’.  Witnesses report that Osman Pashaev and around 5 other representatives of different media were surrounded by Crimean vigilante [or so-called ‘self-defence’] while carrying out their work.  They were then taken away.

Later journalist Natalya Podlesnaya reported on Facebook that nine people were taken away, including one passer-by who tried to defend them. They were beaten by the ‘self-defence’ vigilantes and all equipment, phones and money was stolen.  Even Pashaev’s jacket was removed.  After around 4 hours of such treatment which was worse for Dzhengiz Kizgin who doesn’t speak Russian, they were then taken to the police station, and have been issued with summons for Monday, May 19.   There is no information as to what charges they face.