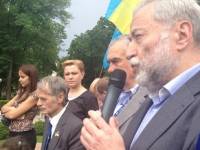 On May 18, several thousand people in Kyiv honoured the memory of victims of the Deportation of the Crimean Tatar People seventy years ago. Those who addressed the meeting included Mustafa Jemiliev, veteran Crimean Tatar leader and Ukrainian MP whom Russia has banned from returning to his homeland, now under Russian occupation.  Another former Soviet political prisoner who spoke at the gathering was Josef Zisels, head of Vaad Ukraine. The Association of Jewish Organizations and Communities, and of the Euro-Asian Jewish Congress.

As reported, the remembrances ceremonies in the Crimea were in marked contrast.  For the first time in 23 years Crimean Tatars were unable to gather in the centre of Simferopol, and serious restrictions were placed on their remembrance activities.  (See Russian Clamp on Crimean Tatar Remembrance for more details).

The centre of Simferopol was blocked by Russian OMON riot police, police and equipment, while the remembrance gatherings in Ak-Mechet on the outskirts of Simferopol and that in Bakchysarai had military planes flying over them, low enough to drown out speakers.

None of this was ‘noticed’ in Moscow, nor was there any mention of the anniversary on the Russian TV channels which devote so much attention these days to distorting information about Ukraine, including the Crimea.

Well-known Crimean Tatar journalist Osman Pashaev, Turkish cameraman Dzhengiz Tizgan and several other journalists were detained and beaten by “self-defence” vigilantes, who took the men to a police station where they were interrogated by Russian FSB and officers from the department for fighting extremism. Their “extremism” was presumably to do with covering remembrance ceremonies for the victims of a monstrous crime.

Leader of the Mejlis of the Crimean Tatar People, Refat Chubarov called on his people to unite around their representative body, the Mejlis.  He thanked younger people for their civic position and asked them to beware of provocations. 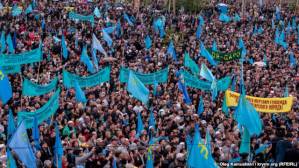 The gathering, attended by over 15 thousand people, was the first which Mustafa Jemiliev could not be at.  He was missed by the crowd who chanted ‘Mustafa’.

In the resolution adopted at the remembrance gathering, the Crimean Tatars call on the world community to held reinstate their rights and demand an end to repression, and recognition of the Mejlis and Qurultai of the Crimean Tatar People.  They also assert their right to self-determination and announce the creation in the Crimea of a national-territorial autonomy.

From reports at Radio Svoboda and the Euro-Asian Jewish Congress