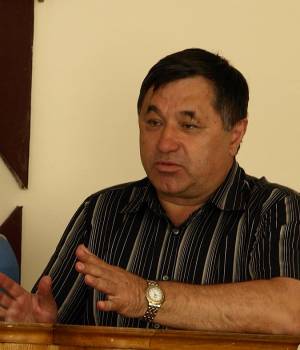 It is two years since renowned Dnipropetrovsk environmentalist Volodymyr Honcharenko was attacked and fatally injured just four days after a press conference where he warned of a “chemical time bomb” with potentially horrific consequences for the region and beyond.  When a journalist disappears or is murdered, it can prove shamefully difficult to bring those guilty to answer, but questions are at least asked – stubbornly, repeatedly.  This has largely not happened in the case of Volodymyr Honcharenko, although he was almost certainly killed because of his work in revealing environmental dangers and crimes of the most immediate public importance.

At his last press conference on 27 July 2012, Honcharenko, a scientist and the Head of the NGO “For People’s Right to a Safe Environment”, called the drawn-out saga over chemically contaminated scrap metal which he was exposing a “detective story”.   He had followed the movements of three obsolete heat exchangers which came originally from Ivano-Frankivsk in western Ukraine.  There were very strong grounds for believing them to be contaminated with one of the world’s most toxic chemicals – hexachlorbenzol.  There was evidence that the owners had been trying to cut the heat exchangers up with workmen landing in hospital with severe poisoning on each occasion.  It costs a huge amount to make such toxic waste safe, and Honcharenko suspected that  attempts were planned to cut the metal up and mix it with non-contaminated scrap metal.  This would explain it having arrived in the Dnipropetrovsk oblast where there is a port sending scrap metal to other countries.

Honcharenko showed photos of the load being moved around Kryvy Rih in the middle of a heat wave.  He and his colleagues had warned the city’s officials of the load’s movements making the lack of even police accompaniment a telling indictment.

Volodymyr Honcharenko was attacked on August 1 while driving to his dacha.  Another car blocked his way and two men got out and began beating him.  He was able to phone his son-in-law before losing consciousness and died in hospital three days later.

There was enough publicity for the local authorities to issue all kinds of statements claiming that, for example, the heat exchangers had been checked and found to be completely safe.   The subterfuge was repeated at higher level also. In September that year, an environment ministry spokesperson was asked at a meeting linked with the Aarhus Convention compliance committee about investigations into Honcharenko’s murder and into the allegations he had made, The spokesperson asserted that a committee had been set up and that the results of tests were expected on Sept 10.  No tests were forthcoming and environmental and human rights groups therefore sent a letter to the Aarhus Convention Bureau, listing the key infringements of that vital agreement.

The authorities failed to take any proper measures and continued to mislead the public until one day the heat containers disappeared.   There are no grounds for believing that the grave danger that they posed had been dealt with.

Exactly one year ago we noted the response from some media sources – Kyiv Post and Telekritika and statements from the international NGOs Article 19 and Frontline Defenders.  A large number of NGOs and concerned public figures, well-known journalists and others endorsed a call for a proper investigation.

It all seemed worryingly modest then and seems even more sparse a year later.  An environmentalist who exposed inconvenient information of the most direct relevance to people’s lives had been killed.  Seemingly with impunity and with questions scarcely asked. That silence is the most frightening of all.