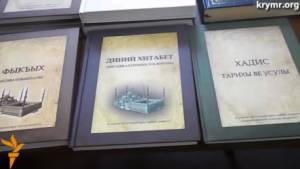 The director of a Crimean madrasa or Muslim school is facing administrative court proceedings for possessing Muslim literature from the list of prohibited ‘extremist literature’ in Russia.  There is no such list in Ukraine, and the literature in question was always widely available in Crimea.

The Spiritual Directorate of Muslims of the Crimea reports that over recent weeks checks and searches have been carried out of Muslim schools and the homes of Muslim clerics.  Russia’s FSB [Security Service] officers appear to have been hunting for material including in the Russian ‘Federal List of Prohibited Extremist Literature’.   The list, which began modestly enough in 2007 with 14 items is now on 200 pages and contains over 2 thousand items.  The Spiritual Directorate has now gone through the list and found all material which Muslims in Crimea could easily – and up till the annexation – legally be in possession of.  It has posted this smaller list, and promises that it will be regularly updated.

Aider Ismailov, Deputy Mufti of the Muslims of Crimea, points out that there was no list of prohibited literature in Ukraine which the bodies carrying out these checks should take into account.

Most of the banned literature, he says, is that of various Muslim movements which Russia considers to be radical. These include the Islamic party Hizb ut-Takhrir and the teachings of Muhammad bin-Abd al-Vakhhaba, colloquially referred to as Vahhabism or other literature from various marginal teachings.  He points out, however, that there are also a number of books by well-known and generally-accepted Muslim scholars.  Some of these were in fact published in Moscow and brought to Crimea from the Russian Federation.  A search was carried out of the madrasa linked to the Strogonov Mosque, and the book ‘Fortress of a Muslim’ was found.  This is hardly surprising since any second Muslim in Crimea owns a copy.  It is a widespread book, and contains prayers.  Any punitive measures against Crimean Muslims over these bans which they are encountering for the first time would be an affront to Muslims.

Russia’s definition of ‘extremism’ has aroused concern for many years among human rights NGOs, and the said list of supposedly extremist literature contains other items whose ‘extremist’ nature seems most questionable.  In 2012, for example, publications were added to it about Holodomor or the 1932/33 manmade Famine in Ukraine as an act of genocide of the Ukrainian people, as well as material about the crimes of the NKVD, the nationalist leader Stepan Bandera etc.  Nor does the fact that items are added on the basis of a court order give any grounds for confidence.  The items linked with Ukraine , for example, were added wholesale by the Meshchansky District Court in Moscow on Dec 1, 2011.

Crimean Tatars have been increasingly under attack since Russia annexed the Crimea in March 2014, and the so-called prosecutor Natalya Poklonskaya appears to have used ‘extremism’ as the grounds for the 5-year-ban on entering the Crimea imposed on the head of the Mejlis of the Crimean Tatar People, Refat Chubarov.  Searches began back in April of ordinary Muslims’ homes, and veteran Crimean Tatar leader Mustafa Dzhemiliev, who was soon afterwards himself banned from his homeland reported that there were FSB officers almost openly carrying out surveillance of Muslims at worship in mosques.

The searches carried out over the last week suggest a major offensive which is about more than finding a book or two.  Mufti Esadullakh Bairov told Radio Svoboda’s Crimean Service that on Aug 13 FSB officers turned up in three madrassas in the Simferopol district., together with officials from the prosecutor’s office, the sanitation service, the so-called education ministry, the fire and other services.  They appeared without any warning at a time when the personnel were on leave and renovations were underway.

He believes that they were trying to catch the schools out, and says that 2 weeks before the beginning of the academic year they came up with a list of infringements that would take months to rectify.

He notes that they found 3 books, but may well have been in a hurry.  If they had waited until people returned from leave and the school year began, people would have seen the list provided by the Spiritual Directorate and removed the books.

Enver Kadyrov, head of the Human Rights Movement of Crimea considers the events to be aimed at intimidating Muslims. He fears that this list of extremist literature could be used as grounds for widespread repression against Crimean Muslims, and adds that Muslims are getting the feeling that the authorities want to ban Islam.

Six months after Russia annexed the Crimea, very many Crimean Tatars and Ukrainians are finding that those who don’t tow the official line can end up banned from the country, like Dzhemiliev and Chubarov, or facing ‘terrorist’ charges like film director Oleg Sentsov and three other opponents of Russia’s annexation.   In Soviet times, dissidents were treated as ‘insane’.  Now they’re ‘extremist’.