Russian ’Resolution’ of a Russian-manufactured Crisis 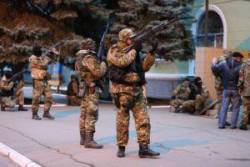 Slovyansk in April. The men who seized control were well-armed, in expensive gear and didn’t know their way around.

The Finnish foreign ministry announced on Tuesday that back in June the United States and Russia held secret talks over Ukraine on Boisto Island in Finland.  This startling announcement and synchronised information about the result – a ‘24-Step Plan to Resolve the Ukraine Crisis’ - were clearly timed to coincide with the meeting in Minsk between, among others Ukrainian President Petro Poroshenko and Russia’s President Vladimir Putin.   There were a number of crucial differences between the peace initiatives and one key similarity.

Despite the Finnish report, the Boisto meeting, albeit sponsored by Finland’s foreign ministry, was between Russian and US experts from various organizations.  There is no evidence that they were representing their governments unlike the meeting between state leaders in Minsk.  The most crucial difference, of course, is that Ukraine took part in the Minsk discussion on how to resolve problems on its territory.

The one similarity: the pushing for a ‘solution’ which will inevitably result in a frozen conflict in eastern Ukraine.  It is still unclear what, if anything, was actually agreed at the Minsk talks but the Vice-President of the European Commission Catherine Ashton later announced that they would now be seeking a truce.  With supreme cynicism Putin told journalists that Russia had no role to play in ceasefire negotiations between Kyiv and the militants Moscow has been backing and heavily arming.  This is despite the fact that over recent weeks a large number of experienced Russian officials, including the notorious ex-Transnistria security chief  Vladimir Antufeyev have been brought in and given leading positions in the so-called Donetsk People’s Republic.

The list of Russians and Americans who set to resolving Ukraine’s crisis on a Finnish island can be found at the bottom of their 24-step plan.  Material about the initiative was published in particularly generous detail and in both languages in the Russian Kommersant newspaper.  Funding was provided by the Finnish Ministry of Foreign Affairs, Carnegie Corporation of New York, and the Russian Institute of World Economy and International Relations (IMEMO)

Judging by the Carnegie Corporation’s website, one of its focuses appears to be ‘rebuilding US-Russia relations.  The Boisto Group certainly appears set on avoiding ‘sensitive’ issues regarding the Ukrainian situation, such as US and NATO direct confirmation of Russian military involvement in Ukraine.  Such undoubtedly sticky moments are simply omitted in the group’s introduction:

“Kiev accuses Moscow of directly and indirectly violating its sovereignty and waging war against it; Moscow accuses Kiev of violently repressing Russian-speakers and creating a humanitarian crisis in eastern Ukraine.”

Such an apparently balanced position fails to note that one conflicting party has ample evidence to substantiate its claims which are confirmed not only by NATO satellite pictures, but by video footage from different Polish, UK and other media sources.  Kyiv’s “violent repression of Russian-speakers” has yet to be proved.  As to who has created a humanitarian crisis, these experts might have considered the Aug 5 statement made by Ambassador Lyall Grant of the UK Mission to the UN Security Council Meeting on Ukraine.  He noted that “where there are no separatists, there is no humanitarian distress. In those cities and towns that have been liberated by the Ukrainian Government life is returning to normal.”

Instead, the Boisto Group has leaped in to try to “break the impasse”.

They propose, among other things, “to establish a UN-authorized peacekeeping mission in eastern Ukraine, grant amnesty to combatants who have not committed war crimes, and respect Ukrainian legislation on the country’s "non-aligned" status”.

So far, for Moscow, so good.  It gets better.

With respect to the Crimea, “discussion of the settlement of legal issues pertaining to the status of Crimea” would be on the agenda, as well as guarantee of uninterrupted water and energy supplies, discussion of access by Ukrainian companies to development of offshore oil and gas reserves, and other issues.

It seems most unlikely that the first carefully worded formulation should be read as meaning the legitimate requirement that Russia end its annexation of Ukrainian territory.

None of this was in fact under any threat in Donbas, a predominantly Russian-speaking region.  In every city that the Kremlin-backed militants seized control of, they prioritized disconnection of Ukrainian channels and their replacement by Russian media.  This is now also the case in the Crimea under Russian occupation where almost all Ukrainian and Crimean Tatar language, or indeed any independent media, have been closed or are under serious pressure.

The plan would involve “amnesty for combatants not involved in war crimes during the hostilities”.  What this would mean is unclear.  One of the reasons that cities like Slovyansk, Kramatorsk and others were so relieved to be liberated from the militants is that the latter had not only taken huge numbers of hostages, and murdered some, but had also unleashed total lawlessness, with plundering, racketeering etc. rife.

There are some interesting items in the plan, including the proposed “withdrawal of regular Russian and Ukrainian army units to an agreed distance from conflict zones”.  With respect to regular Russian forces on the border, this is no problem.  Their presence on the border has always served other purposes, including concealment of the direct, but consistently denied, flow of arms and men across the border.  Even as the death toll rises of Russian soldiers killed in Ukraine, Moscow is continuing to pretend that no soldiers are fighting in Ukraine and placing pressure on the dead men’s families to maintain this lie.

There is no time limit on any of the other proposed UN peacekeeping efforts almost certainly guaranteeing a permanent ‘frozen conflict’.

This is despite the lack of any justification, as demonstrated by the fact that areas liberated from the militants are grateful to the Ukrainian army and show no sign at all of regretting the militants’ defeat.

A frozen conflict, whether via the Boisto Group’s plan or through EU pressure for a ceasefire, is undoubtedly the option preferred by Moscow.  As ‘resolution’ of a conflict almost entirely caused by Russia, that beats even the Munich Agreement of 1938.