Mariupol: Putin get out!Russian NGO has list of 400 killed or wounded Russian soldiersIf Russia is not at war, then who is in those freshly-dug graves?Macabre Convoy: Cargo 200 from Ukraine to RussiaInvasion by any other nameHalf-empty or half-emptied?Poland knows about Russian ‘humanitarian convoys’. It didn’t let one in.Stand up to Putin: buy Polish apples!No Sanctions Game Changer?Will the West sleep through this final wake-up call?Russian LifeNews inadvertently told the truth about downed Malaysian airlineMilitants accused of deliberately shooting at Severodonetsk residential areaSent to be shotThe EU’s Opaque Dealings with UkraineWhose anti-Semitic and Homophobic Choice?What should they talk about, Mr Putin?The Peace that chokes RussiaEU’s Clear and Consistent Capitulation?Russian tanks and Ukrainian orphans in Moscow’s unabated offensiveCheck your sources, Mr Lavrov
• Topics / Politics and human rights

More than a thousand residents of the port city of Mariupol joined arms on Saturday in a human chain at a checkpoint outside the city in the direction of Novoazovsk.  The number of people is likely to have been larger with a local Internet publication reporting at 16.00 that more and more people were arriving.  Later a photo, reporting “thousands of unarmed people at checkpoint, 30 km away from Russian tanks”. 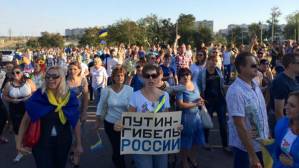 The placard reads "Putin is the destruction of Russia  [Photo: Gregory Zhyagalov]

Those who came brought Ukrainian flags, ribbons, etc. and many wore clothing with traditional Ukrainian embroidery.

“We are for peace, they said.  We want to live in Ukraine. We don’t want war”.  They also went up to the Ukrainian soldiers guarding the city and chanted “Thank you!” and clapped.

The organizers explained that the demonstration was not only about uniting residents of Mariupol, but also an attempt to make people in Russia want to save the lives of their husbands, sons and brothers.

Since Friday Mariupol residents have also been actively digging trenches to stop the feared invasion of Russian military (or, less convincingly, of Kremlin-backed militants). 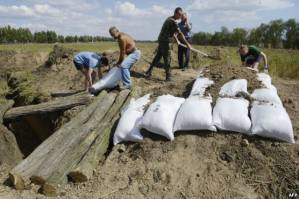 Mariupol is a strategic city on the Azov Sea with a population of close to half a million.   It is now a crucial focal point after forces believed to be Russian were able to swiftly seize the town of Novoazovsk 20 kilometres away.

Roland Oliphant from the UK paper Daily Telegraph that the Ukrainian military are convinced that the soldiers are Russian.  "They’re different to the fighters in Donetsk. We know what they’re like, we’ve fought them before. These guys are different. Their kit, their uniforms, everything – they’re Russian armed forces."

The fact that there are now international journalists and OSCE representatives in the city means that Moscow may decide to avoid being caught.

Anti-Putin and pro-Ukrainian demonstrations over the last few days have very clearly shown the deception and dishonesty of Moscow’s rhetoric on eastern Ukraine.

Neither Moscow, however, nor the proxies it has lavishly equipped with sophisticated arms, have demonstrated any interest in the views of the local population.