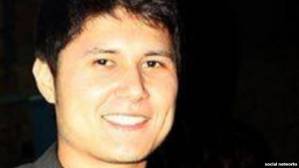 25-year-old Crimean Tatar, Edem Asanov, has been found dead in an abandoned sanatorium in Yevpatoria, a week after he disappeared on Sept 29.  Edem Asanov was not politically active, and according to his sister was a peaceful person who was not inclined to conflict.

Refat Chubarov, head of the Mejlis or representative-executive body of the Crimean Tatar People says that Edem was hanged.  He believes that the authorities are trying to establish a mood of terror and fear  in Crimean society.  Edem Asanov’s funeral will take place on Tuesday.

There have been four abductions or disappearances since Sept 27, and at least three other Crimean Tatar families will almost certainly be going through hell, together with the Asanov family.

In the early evening of Sept 27, two young Crimean Tatars were abducted from Sary-Su near Belogorsk in the Crimea.  19-year-old Islam Dzhepparov and his 23-year-old cousin Dzhevdet Islamov were forced into a dark blue Volkswagen Transporter and taken away in the direction of Feodosiya.

The claims from the police and FSB [Russian security service] that they know nothing about the abduction have been met with scepticism, which is exacerbated by their failure to find the young men despite having all details, including the minivan’s registration number.

Hundreds of Crimean Tatars gathered the next day outside Islam Dzhepparov’s home.  Islam’s father had a meeting with the head of the occupation government Sergei Aksyonov on Oct. 1.   Abdureshit Dzhepaparov  says that everything was done to provoke Crimean Tatars to make measures in retaliations. “On the roofs around the building where the meeting took place there were a lot of snipers, people saw jeeps with men carrying machine guns, and around the city there were a lot of soldiers.”

Two days later, on Monday Sept 29, Edem Asanov set off for work at the Prymorye sanatorium in Yevpatoriya.  We now know why he did not arrive.

23-year-old Crimean Tatar Apselymov Eskender has not been seen since Oct 3 when he left his flat in Simferopol and headed for work.  He did not arrive, and there is no answer from his telephone.  Shevket Namatullayev, a Crimean journalist, has passed on details about how the young man was dressed and a request from his parents to phone if people have any information

It is increasingly difficult to believe in any chance with these abductions or disappearances.  They coincide with a major offensive against the Mejlis, or representative-executive body of the Crimean Tatar people and Muslims in the Crimea.  Veteran Crimean Tatar leader Mustafa Dzhemiliev has spoken of 18 disappearances of Crimean Tatars since Russian invaded and annexed the Crimea in March this year.

Refat Chubarov recalls chillingly relevant words written by Memorial about the Northern Caucuses.  “Abductions are carried out by staff both of the local, and the federal enforcement bodies. A number of the abductions take place according to the classic, “Chechen” scenario, when armed men in masks burst into a home and take the person they want away. However many abductions are carried out very ‘professionally’: a person leaves his home and doesn’t return, or later he’s found murdered.”

The almost certain murder of Edem Asanov, the abduction of two young Crimean Tatars and disappearance of a fourth young man of similar age, against the background of all other repressive measures, can only heighten the suspicion that the Crimean puppet regime and those pulling its strings in Moscow want to intimidate the Crimean Tatars and force them to leave their homeland.