President and authorities make life even harder for displaced people 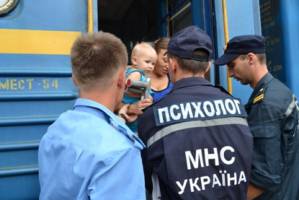 Ukraine’s Migration Service is continuing to hamper attempts by Crimeans forced to leave their homes to legitimize their position in mainland Ukraine.  The President is also in no hurry to sign the urgently needed law on displaced persons.

The leaders of a number of human rights organizations, including many working directly with displaced persons have been forced to issue an open appeal again, this time to President Petro Poroshenko.  They point out that the Law on Internally Displaced Persons was finally adopted by parliament on Oct 20, yet has still to come into force.  This time the delay is due to the President not having signed the bill into law.   They point out that the bill was drawn up by a group of MPs which included members of the Petro Poroshenko Bloc, together with lawyers from the President’s Administration, human rights and civic organizations and consultants from the UNHCR and OSCE.

In short: Where is the signature?

The Centre for Journalist Investigations in its turn notes that Ukraine’s Migration Service has still not managed to begin issuing documents confirming IDPs’ place of residence in mainland Ukraine.  One of their journalists has been trying in vain to get such a document in the Svyatoshynsky District of Kyiv.

The Migration Service says that they have such a document, but are not presently issuing them.  An official explained that although the law says that they can provide such a document purely on the basis of a passport, there is no database for such documents.  Since the document will unfortunately be needed for some period of time, what happens when a person wants to extend the document (if there’s no database)?

The Centre is unimpressed by such arguments and points out that an Interior Ministry Order from Sept 26 on the procedure for issuing the documents entered into force on Oct 17. This stipulates that only a passport or document with information about where they are permanently registered is required, and the document is issued the same day.

Despite this, the journalist was asked for a number of documents which the law does not require.

Two weeks ago the head of the relevant department of the Migration Service, Alla Cherednichenko explained that officials were mixing up two quite different documents: those issued to migrants and those to IDP.  She promised to deal with the situation within two weeks, however no solution is yet in place despite the amendments to the law which should regulate the situation.

The amendment to the Law on ensuring the rights of citizens and legal regime on temporarily occupied Ukrainian territory passed in May is vital since it ensures (or will, when they finally get it) that people have a document legalizing temporary registration without forcing them to give up their Crimean registration.

The Centre believes that the real number of IDP may be as high as 900 thousand (nearly 3 times the official figures) and expresses frustration that the law so desperately needed to regulate the procedure for registering IDP and issues regarding employment and social payments is still not in force.

On Oct 20 the Prime Minister Arseny Yatsenyuk said that the law envisaged payment to IDP of 884 UAH , with these payments to be received by 420 thousand people.  He estimated a figure of 355 million per month, and 2 billion UAH over 6 months.

On Oct 20 there was enormous relief that parliament had finally stopped dragging their heels on a law which, with winter approaching, was urgently needed.

Into the second week of November the Centre’s frustration is shared.