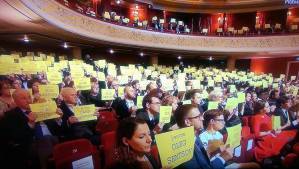 In a wonderful show of solidarity, members of the Polish Film Academy have called on Russia to release Crimean film director Oleg Sentsov and have promised not to abandon their Ukrainian colleague.  As can be seen from the photos, all those present at the Academy’s Orły 2015 award ceremony on March 3 - film directors, scriptwriters, editors, actors and others - were invited to raise placards reading ‘Jestem OLEG SENTSOV’ [Je suis Oleg Sentsov, after the original act of solidarity with Charlie Hebdo).

The announcement on the Polska Akademia Filmowa [PAF] website explains that they are continuing their action “in support for Oleg Sentsov, Ukrainian film director imprisoned in Moscow for his protest against Crimean annexation.”

Oleg Sentsov’s letter to Agnieszkka Holland in response to joint protests with other European film directors, actors, etc. is cited.  He wrote:

“I am sincerely grateful to all the film people who support me, and I particularly thank Poles who are helping Ukraine at this difficult time, and who are proving to be real brothers.”

“As the Polish Film Academy we wish to symbolically take care of him.  We Poles know very well what the word prison means.

We ask you to take part in our protest.  Photograph yourselves with the words ‘Jestem OLEG SENTSOV and send the photos to pnf[at]pnf.pl with your signature.

PAF will shortly be providing an account for any people wishing to contribute to parcels for Sentsov.

“Let us not abandon in prison our Ukrainian colleague who wanted to live peacefully in the country where he was born and made his films!”

The appeal is by Dariusz Jabłoński, Prezydent of the Polish Film Academy.

Oleg Sentsov has not been forgotten by other European colleagues.  At the Berlinale Film Festival in February, the Berlin Academy of Arts reiterated earlier calls on Russia to free Sentsov.  It stated that any formal contact with Russian arts bodies would be inconceivable until he is released.

On Feb 27, an article by Mike Downey, deputy chairman of the European Film Academy, was published in Variety.  The article, Downey writes, is “to spread the word about Ukrainian director Oleg Sentsov, who has been imprisoned on charges of terrorism.”

Downey writes that the “campaign by the European Film Academy for Sentsov’s release, supported by many leading European filmmakers, has fallen on deaf ears, as have calls from Amnesty International for an investigation into his torture and imprisonment. Rather, the Russian authorities recently extended Sentsov’s detention until April, when they plan to put him on trial.

During his time in prison, Sentsov, 38, has been unable to see his children, 12-year-old Alina and 9-year-old Vlad, who suffers from autism. Sentsov has been raising his children himself, with the help of his sister. …

…. As the deputy chairman of the European Film Academy, I believe it is essential that we maintain pressure on the Russian authorities to release Oleg Sentsov. Only with public awareness of Sentsov’s plight and strong international political pressure will we be able to end his detention. This is what we are being advised to do by our friends and colleagues in Ukraine.”

Mike Downey’s letter can be read in full here.  Addresses are provided at the end for writing to Sentsov.

Downey mentions a crucial feature of this case, namely that Russia is claiming that Sentsov was only arrested on May 11, whereas in fact he was in custody – and tortured – from the previous evening.

Sentsov was tortured, beaten and humiliated in an attempt to get him to testify against the leaders of EuroMaidan and the new Ukrainian government, claiming that they had ordered the supposed ‘terrorist acts’.  He was told that if he didn’t they would increase the charges against him, claiming him to be the mastermind.

Oleg Sentsov did refuse, as did civic activist Oleksandr Kolchenko.  The two other opponents of Russian annexation of Crimea – Gennady Afanasyev and Oleksy Chirny –  were clearly subjected to the same methods of interrogation and ‘confessed’,   with at least Afanasyev giving false testimony against the others.

Sentsov and Kolchenko have been recognized by the authoritative Memorial Society as political prisoners.  It is unclear what has now happened to Chirny, and his case is also of enormous concern.  Afanasyev continued to cooperate with the Russian investigators, changing his story at least four times.   In December 2014 Afanasyev was sentenced to 7 years in a closed trial which the other defendants’ lawyers knew nothing about.  Since his testimony could be used to sentence Sentsov, Oleksandr Kolchenko and Oleksy Chirny to 20 years imprisonment, it was clearly crucial that the defence had the opportunity to be at Afanasyev’s trial and cross-examine him.  More details here: Russian secret trial to convict opponents of Crimean annexation

The day after the Parliamentary Assembly of the Council of Europe called for Sentsov’s release, the Russian ‘investigators’ laid new charges.  Over nine months after he was taken into custody and his flat searched, he was suddenly accused of illegal acquisition, transfer, sale, storage, transportation or carrying of weapons, explosives and explosive devices.

The defence has been given no more information about these new charges, and the prosecution has yet to present any evidence against the defendants on the charges of involvement in a ‘terrorist plot’.   Since the supposedly planned terrorist acts never happened, this case has all the hallmarks of the old Soviet show trials based on absurd ‘confessions’ tortured out of defendants.