No liability for police officers who beat up civic activist this January? 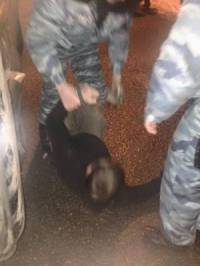 Not only have the former Berkut officers who beat up rights activist Konstantin Reutsky on Jan 29 this year not been punished, but the Interior Minister’ adviser is planning to award them for stopping a car with weapons.  This apparently gives the lie to police assertions at the time that the men had been suspended pending an inquiry.

As reported, Reutsky, Anastasia Stanko from Hromadske.TV and Pawel Pieniążek from the Polish ‘Krytyka Polityczna’ were returning to Kyiv from the ATO [anti-terrorist operation] zone where they had been working for two weeks.  Reutsky, who was collecting material for a Luhansk Internet publication, was driving.

They were stopped at a checkpoint near the town of Pisochyn on the approach to Kharkiv by a group of traffic police officers whom they know to be former Berkut riot police officers.  The officers appear to have become aggressive when Reutsky videoed them examining the car and Reutsky was thrown to the ground and punched.  The officers grabbed the video recorder that he had been using for reports about people living in areas close to military action who are constantly coming under shelling.  They returned the recorder after the incident but without the memory card.

From the outset, the three all stated that one of the three officers jeered at their indignation, saying: “nothing was done to us over [our role on] Maidan, so why now, over some journalist?”.

The police immediately gave a different version, claiming that the journalists were to blame and that Reutsky had ‘fallen’.  This was denied by all three of them, and is certainly not the impression given by the photo one of the witnesses managed to take of Reutsky being manhandled.

In an open letter to Interior Minister Arsen Avakov, Stanko points out that over a month has passed, and there is no evidence of anybody having been held to account over the incident.  Quite the contrary, she says, since Anton Herashchenko, adviser to the Minister, is seriously proposing to give the officers awards for stopping a car with weapons.

On the other hand, she asserts, people in authority within the ministry are trying to put the blame on the journalists themselves, as though Reutsky provoked the attack on him.   The fact that – as she asserts -  the Interior Ministry management are repeating overt lies is bitter confirmation of the ex-Berkut officers’ certainty of their own impunity.

Stanko demands that Avakov dismiss officers Riyako, Kostyuk and Honcharenko and bring criminal charges against them for exceeding their powers; officially and publically strip MP Anton Herashchenko of his status as ministerial adviser;  identify and hold to answer those who prepared and published material on the official Interior Ministry website with false information about Hromadske.TV journalists

They did not, she stresses, stand on Maidan so that yet again criminals with police stripes are whitewashed.  At least this time, let’s show that they do answer for their actions.