Why is Ukraine restricting Crimeans’ rights?Transport blockade of Crimea a Gift to the Kremlin?Russian, or else: On how Russia is foisting its citizenship in CrimeaCrimean Tatars and others face citizenship dilemmaRussian methods: Calls for Crimea’s return to Ukraine could get you imprisonedMGIMO historian fired for article comparing Crimean annexation to Hitler’s AnschlussInformation channels at warDonetsk Front in Putin’s Dirty WarScurrilous rumours used to spread fear and distrust in Eastern oblastsAutoMaidan activist shot at near ChongarRussian troops already deployed in mainland UkraineThe Crimea is our Home: Get your troops out!Crimean "referendum" a grotesque farceCrimean Tatars call on all Crimeans to boycott "referendum"Avoiding Ukraine’s language minefieldsChief Rabbi and others dismiss Putin’s “anti-Semitic extremist” claimsRussian propaganda must be challengedWestern Media: Don’t distort the situation in Ukraine!Russia’s aggression poses dangers beyond Ukraine’s bordersCrimea: Anti-Semitic card and other provocation in time of siege
• Topics / Freedom of movement
• Topics / Human Rights Abuses in Russian-occupied Crimea

Ukraine must not help Russia hide its rights violations in Crimea 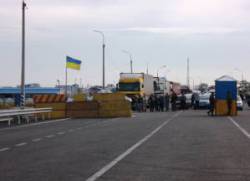 Ukraine may be unable to guarantee Ukrainian citizens their rights in Crimea while it is under Russian occupation, but they should not make it harder for them to cross into and out of Crimea.  Nor, when Russia has used all means to impose an information blockade and prevent proper monitoring of its rights violations, should Ukraine be placing obstacles in the way of those foreign nationals who can monitor and report on the situation.

The Human Rights Agenda, a civic initiative including major Ukrainian human rights organizations, has issued an appeal regarding the Rules for entering and leaving temporarily occupied Ukrainian territory adopted by the Cabinet of Ministers of June 4, 2014.  While in general positive in their assessment of attempts to regulate the procedure for crossing at checkpoints, there are some serious failings.  These worsen the human rights situation, undermine the link between Crimea and mainland Ukraine and create additional problems both for Ukrainian citizens, and foreign nationals and stateless persons who are in Ukraine legally.

Russia is currently inviting only those foreign nationals prepared to breach Ukrainian law by not entering Crimea via Ukraine and provide propaganda and lies about the situation there.  It is stifling the media, persecuting individuals who express opposition, and obstructing attempts to properly monitor the rights situation.  The most crucial initiative monitoring violations – the Crimean Human Rights Field Mission – has been placed on a ‘stop list’ of organizations which Russia is planning to declare ‘undesirable’ and make illegal.  The importance of not obstructing contact between Crimea and mainland Ukraine cannot be overstated.

The Resolution passed restricts the constitutional right to freedom of movement and breaches the norm of the Constitution which stipulates that any restrictions must be imposed by law.   By imposing such restrictions, the Human Rights Agenda stresses, the Cabinet of Ministers has exceeded its authority.  It also effectively results in Ukraine’s breach of its international commitments and a number of constitutional rights since it hampers freedom of movement, restricts the rights of children, flouts the obligation to facilitate the work of human rights activists and journalists, etc.

The situation is especially difficult for foreign nationals, stateless persons and also for children / families travelling with children.  From now on children under 16 cross what should be the administrative border between Crimea and mainland Ukraine in accordance with the Rules for crossing the state border.  This is in breach of the Law on temporarily occupied Ukrainian territory according to which temporarily occupied territory remains an inalienable part of Ukraine.

Children now need to have travel documents or a passport, and permission of both parents, with the latter also needing to have a Ukrainian passport for travel abroad (as opposed to the internal ’passport’ which all Ukrainian nationals have).  Organizing such documents takes an enormous amount of time, and it’s virtually impossible to obtain them in Crimea itself.   This leads to obvious infringements of children’s rights, especially if one of the parents is in Crimea, the other in mainland Ukraine.

Foreign nationals and stateless persons living in Crimea must get a special permit issued in mainland Ukraine within 5 working days. There are also only 7 possible grounds for receiving such a permit, namely:

3.     Visiting the graves of close relatives

5.     “The need to take part in ensuring Ukraine’s national interests for the purpose of peaceful regulation of conflict, liberation of Ukraine’s territory from occupation or on issues of humanitarian policy(solely on the application or agreement of the Ukrainian Foreign Ministry)”;

6.     The need to carry out diplomatic and consular functions, including within the framework of the activities of international organizations which Ukraine is a member of (solely on the application or agreement of the Ukrainian Foreign Ministry)

7.     Regular trips to temporarily occupied territory linked with working on the railways (not relevant at present for Crimea since all railway communications have been stopped).

This means that in order to enter Crimea and Sevastopol, foreign journalists, lawyers and human rights activists will need to apply to the Foreign Ministry citing no 5, i.e. “ensuring Ukraine’s national interests, etc.).

Protection of human rights, legal defence of clients or journalist work are simply not given as options.

Foreign nationals and stateless persons will also have to provide a document confirming that they have enough money to finance themselves in Crimea or a letter from the receiving side.  This again is in breach of the law on temporarily occupied territory and is likely to prevent a considerable number of people from making such trips.

As reported earlier, border guards will be able to prevent a Ukrainian national from crossing what should be an administrative border between Crimea and mainland Ukraine.  They will be able to refuse a person permission on any formal grounds which gives enormous scope for abuse.  It will be difficult for the person to appeal against the decision, especially if the Ukrainian national is in Crimea and has been refused entry to mainland Ukraine.

The Human Rights Agenda proposes drawing up new Rules which remove the flaws and promote defence of the rights of Ukrainian citizens, foreign nationals and stateless persons.  There should be no restrictions at all for Ukrainian citizens and facilitate contact between people in Crimea and mainland Ukraine.  The Rules should also make it simpler for foreign nationals and stateless persons to receive permission.  The initiative believes it vital that their representatives and members of other civic organizations are involved in drawing up new Rules.