Moscow congress defends separatists worldwide, only not in Russia 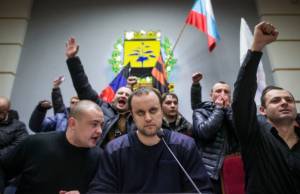 Pavel Gubarev and other Kremlin-backed militants in Donbas

Russia’s endorsement of “the right of nations to self-determination” begins beyond its borders, including those that it has illegally redrawn.  A congress of separatists from around the world is due to take place in Moscow on Sept 20, with participants’ travel costs paid for by the Anti-Globalization Movement of Russia whose only disclosed income is from a Kremlin-patronized fund.  The news comes in a week that has seen Tatar leader Rafis Kashapov imprisoned for supposed ‘calls to separatism’ and Darya Polyudova standing trial on similar charges.  In both cases the charges pertain to criticism of the regime and of  Russia’s occupation of Ukrainian Crimea and war in Donbas.

RBC.ru has drawn attention to the planned congress of separatists from other countries, the second international congress organized by the Anti-Globalization Movement.  The stated aim of the event is to create “an international working group coordinating the actions of independence fighters from around the world”.  The invitation states that in the clash between two fundamental tenets of international law – the inviolability of state borders and the right of nations to self-determination, the members of the congress support the latter.

According to the organizers, such a congress is taking place for the first time at a time when issues pertaining to the gaining of independence by small ethnic groups and territories are ever more immediate.  Anti-Globalization Movement leader Alexander Ionov refused to give RBC details about the participants expected on Sept 20.  He claimed this was for security reasons and that western countries might try to stop delegates leaving for Moscow.   The movement’s website mentions various ethnic groups and territories, including the Texas Nationalist Movement, a secessionist organization sporting their own ‘republic’; the Uhuru Movement, described by Wikipedia as a radical political organization centred on the principles of Pan-Africanism; the Irish Sinn Fein which began as the political wing of the Irish Republican Army or IRA, and others.    Not one ethnic group or territory within the Russian Federation is mentioned, despite the latter having 185 different ethnic groups including those, for example, in Chechnya who are demanding full independence.   Last year many delegates from indigenous groups in Russia were prevented or obstructed when they tried to attend the UN Conference on Indigenous Peoples.  Russia also put pressure on the organizers to stop them inviting Crimean Tatar leaders Mustafa Dzhemiliev and Refat Chubarov whom Russia banned from their homeland shortly after annexing Crimea.

Two ‘honourable’ members of the Anti-Globalization Movement are named, with their photographs given: Syria’s highly-controversial but Russian-supported President Bashar Hafez al-Assad and Iran’s and Mahmoud Ahmadinejad, the no less contentious Iranian President until 2012.

RBC reports that the Movement has been registered as a regional NGO since March 15, 2012.  Its head Alexander Ionov is also a member of the presidium of ‘Officers of Russia’.  That is headed by Anton Tsvetkov, head of the security commission of Russia’s Civic Chamber, and includes Josef Kobzon, the singer under international sanctions for his active support for Russia’s annexation of Crimea and aggression against Ukraine.

This ‘regional NGO’, it transpires, is willing to pay participants’ travel and accommodation costs. Ionov told the journalists that their funding comes from donations and from government grants, and that these are supposedly sufficient to cover at least one international conference a year (this is, in fact, the second).

RBC could find no information about the government grants in the relevant databases. The NGO does, however, regularly take part in the ‘National Charitable Fund’ competition, and has twice received grants – last year for 1 million roubles; this year for 2 million (as of Sept 16, both grants would come to around 45 thousand USD).

RBC explains that the National Charitable Fund was created at the end of 1999 at the initiative of Vladimir Putin (then Prime Minister).  Its stated aim is to provide funds supporting military servicemen and the development of military-patriotic projects.  It has various sponsors and is under President Putin’s patronage.

RBC points out that the cost of renting a hall in the President Hotel is 45 thousand roubles on a Saturday or Sunday.  The final press conference will be held on Monday, Sept 21 at a venue where halls cost between 20 and 30 thousand roubles for 1-4 hours.  The return flights for participants coming from the USA, Latin America and European countries will also not be cheap.

The previous conference under an anti-war banner was held in December 2014.  The nature of the event, and the shared view as to villains and heroes can best be gauged from the report by Joe Lombardo, one of five participant members of the  United National Antiwar Coalition [UNAC].  As well as their own presentations, they heard addresses from “a number of leaders from Novorossia (the area declared independent by the people of Eastern Ukraine), including Oleg Tsarev, the speaker of the Parliament of Novorossia and Alexander Kofman, the Minister of Foreign Affairs of the Donetsk People’s Republic.”

Lombardo explains how that spoke at length to “one of the fighters for the defence forces in Donetsk”, who is not named.  This person told him that he had originally been a Euromaidan protester, but that “it became clear to him that neo-Nazis were playing a leadership role and were fomenting anti-Russian sentiment.  He eventually left Kiev and joined the defence forces in the East.”

The Declaration produced condemns “the crimes and murders perpetrated against the people of Novorossia” and “strongly condemns political repression, particularly in countries that have positioned themselves as democratic nations.”  It asserts that “events in Yugoslavia,  Iraq,  Libya,  Syria and Ukraine demonstrate the predatory foreign policy of the US and its NATO allies” and speaks of the US government’s “depressing statistics in the field of human rights.”

The ‘depressing statistics’ reported by all international human rights NGOs, as well as by the Russian Memorial Human Rights Centre regarding human rights violations  in Russia were not mentioned.

It can be assumed that the defenders of self-determination on Sept 20 will also find nothing to say about the trial of Tatar leader Rafis Kashapov and the 3-year sentence passed on Sept 14.  Kashapov was found guilty of ‘hate speech’ and ‘calls to separatism’ over critical comments on his social network page about Putin and Russia’s invasion and annexation of Crimea (all posts can be assessed here).  They will doubtless also ignore the trial which has just begun of Kuban activist Darya Polyudova, who is also charged with having made ‘calls to separatism’ on April 4, 2014.  According to the prosecutor, “acting out of hatred for the political regime in the Russian Federation”, and intending to carry out public appeals to carry out extremist activities, she held a single-person picket with a placard which she then posted on the Internet.  It read: “Not war against Ukraine, but revolution in Russia!  Not war, but revolution!”

Polyudova is one of three Krasnodar residents who tried to hold a peaceful march in support of ‘federalization for Kuban’ in September last year.  She spent a considerable amount of time in detention, and the other two fled to Ukraine, expecting similar treatment.  All have been placed on Russia’s Federal List of Terrorists and Extremists.

Russia’s demand for Ukraine’s federalization, or at least ‘decentralization’, has been in stark contrast to its treatment of those in Siberia and Kuban who tried to hold marches only in favour of greater autonomy.  Polyudova could pay for this with a period of up to 5 years imprisonment, others have ended up in exile.

None of this is new.  In Soviet times, there were plenty of communists who would be put up in good Intourist hotels and could be relied upon to slam oppression and discrimination in the USA, while finding everything in the Soviet Union exemplary.  The former KGB agent now in the Kremlin and patron of the National Charitable Fund surely remembers that period well.  He and his cronies, as well as the militants the Kremlin is funding and controlling in eastern Ukraine, have long shed the ideological coating, but use exactly the same techniques.  Depressingly they still find takers.