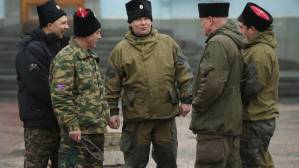 Cossacks in 2014, working closely with the Russian military who had just invaded Crimea

The 25 or so Crimean Cossacks who carried out a raid on Crimean Tatar homes on Dec 28 were accompanied by officers from Russia’s FSB and ‘Centre for Countering Extremism’.   Their visitation, according to Saniye Ametova, head of the Krasnopereskopsk Regional Mejlis, was provoked by the fact that in several villages in the region, including Dolinka, bus stops had Ukrainian state symbols painted on them, and the pedestrian crosses were in the yellow and blue colours of the Ukrainian flag.

That this should have brought the FSB and an anti-extremism squad out is absurd, yet unfortunately typical in Russian-occupied Crimea.  At least they were relatively proper in their behaviour, Ametova reports, unlike the Cossacks who behaved aggressively and tried to burst into private homes.   The Cossacks’ aggression was fuelled further by the Crimean Tatar flag over one of the homes.

Nine homes were targeted, all of them Crimean Tatar.  Nariman Dzhelyal,   First Deputy Head of the Crimean Tatar Mejlis or representative assembly suggested that this incident should serve as an answer to those who feel aggrieved at international attention to Crimean Tatars and not ethic Ukrainians, for example.

“In Crimea they paint Ukrainian symbols, and the local enforcement officers turn up not at the homes of Crimean Ukrainians, but at those of Crimean Tatars.  Any further questions?”, he asked rhetorically.

Saniye Ametova believes that similar raids could be carried out in neighbouring villages.

While Nariman Dzhelyal has a point, it should be said that it is not only Crimean Tatars who are constantly harassed or even penalized for Ukrainian symbols.  Where individuals are harassed, it is for their pro-Ukrainian position, regardless of whether they are Crimean Tatar or ethnic Ukrainian. 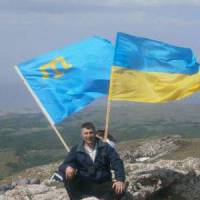 On some occasions, such as when Iryna Kopylova and Veldar Shukurdzhiyev were swooped on by a large contingent of ‘counter-extremism’ officers while taking photographs of themselves holding the Ukrainian flag on Lenin Square in Simferopol, a pretext is invented for administrative proceedings.

Not always, however.  On March 9, 2015 Shukurdzhiyev, Leonid Kuzmin and Oleksandr Kravchenko were detained after a totally peaceful gathering to mark the 201st anniversary of the birth of the Ukrainian poet Taras Shevchenko.  They were all sentenced to 40 hours community work for displaying what the police called and the court agreed were ‘prohibited symbols’, namely the Ukrainian flag and ribbons in the colours of the flag.

Russia claimed back in February – March 2014 that it was ‘protecting’ Russians in Crimea without ever demonstrating any evidence that their rights were being infringed.  From its invasion, it became downright dangerous to display Ukrainian and Crimean Tatar symbols or in any other way show loyalty to Ukraine.  The physical attacks, abductions, torture, disappearances and/or murder were generally left to so-called ‘self-defence’ and effectively paramilitary vigilantes, including Cossacks.  On Dec 28, these turned up together with Russia’s ‘enforcement’ officers.