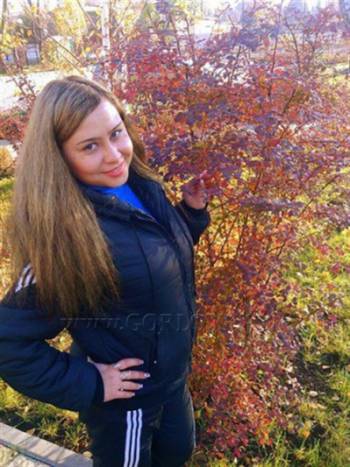 The body has been found of 17-year-old Iryna Yermakova from Horlivka who disappeared in December last year.  There are strong grounds for believing that she was abducted by members of the Troy gang of Kremlin-backed militants, but little, if any hope, of a real investigation with Horlivka now within the so-called ‘Donetsk people’s republic’ [DNR].

Gorlovka.ua, the publication which first reported Iryna’s disappearance, now informs only that Iryna’s body was found in the Korolenko Pond on the outskirts of Horlivka.  There is nothing to indicate what condition her body was found in, or how she died, but the message posted on VKontakte mentions an autopsy scheduled for March 10., with the funeral the following day.

Her mother explained back in December that her daughter had gone out to the shop.  She was in household clothes and certainly not planning to go further.  That was the last time her mother saw her, however Iryna did call once.  She was distressed and said that she was being held in a basement.   The family made all kinds of attempts to find her through social networks, promising to pay a ransom.

In February, Iryna’s mother said also that a young man had reported seeing the young woman in a house in Ozeryanivka occupied by fighters from the Troy unit.

More, unfortunately, may only become known should warring groups of militants decide to ‘tell on each other’.  This was the case in February when a horrific video was posted of a man being savagely tortured by a Russian militant.  It appeared to show a (masked) Russian national known as Olkhon lashing a man tied to a post whom he claimed was a drug dealer.  No evidence, no court, just a man using horrific force to extract ‘confessions’, and escalating the savagery if the man didn’t answer quickly enough.

That video was made public because the gang calling themselves the Troy special purpose unit were aggrieved after their bloody confrontation with fighters loyal to DNR leader Alexander Zakharchenko in January.  Some 94 of their fighters were missing, presumed dead.

The information about that conflict came from an open letter to Zakharchenko from the ‘official representative of the NGO ‘Donetsk Republic’ in Russia, Yevgeny Shabaev. According to him, the Troy unit is mainly made up of Cossacks and ‘veterans of local conflicts’, and in the main Russian nationals.  The unit had received gratitude from DNR for its ‘service’ over 18 months, until “the outrageous instance of anti-constitutional actions” on Jan 29-30.

This began, Shabaev writes, with the commander of the Troy intelligence unit V. Novikov [Bely] being abducted and the two fighters with him shot in the back.  This was the beginning of an offensive against Troy fighters with the fate of 92 men unknown. Or almost unknown, since fighters who escaped reported that two trucks had taken away black bags probably containing the bodies of the missing militants.

The Troy militants posted the video about Olkhon since he allegedly belonged to a rival gang called ‘Novorossiya’.  They in fact claimed that they would be providing their information to the military prosecutor of the Russian Federation (since he is a Russian national) “for a decision to be taken regarding the war crime”.

Russia has certainly not demonstrated any concern about the already massive weight of proof of crimes committed by Russian or pro-Russian militants in Donbas.  There is, for example, ample evidence of war crimes committed by Russian Igor Girkin and his men, especially in Sloviansk, however all remain at liberty and Girkin is in fact a star on many pro-Kremlin media, such as Komsomolskaya Pravda’s radio service on which Girkin recently admitted to extrajudicial executions.

While the battle between Zakharchenko’s men and the Troy unit was almost certainly over power, they are all implicated in grave crimes.  These probably include the abduction and killing of 17-year-old Iryna Yermakova